One night in 1937, Bob Cobb, then owner of The Brown Derby, prowled hungrily in his restaurant's kitchen for a snack. Opening the huge refrigerator, he pulled out this and that: a head of lettuce, an avocado, some romaine, watercress, tomatoes, some cold breast of chicken, a hard-boiled egg, chives, cheese and some old-fashioned French dressing. He started chopping. Added some crisp bacon -- swiped from a busy chef.

The Cobb salad was born. It was so good, Sid Grauman (Grauman's Chinese Theatre), who was with Cobb that midnight, asked the next day for a 'Cobb Salad.' It was so good that it was put on the menu.

Cobb's midnight invention became an overnight sensation with Derby customers, people like movie mogul Jack Warner, who regularly dispatched his chauffeur to pick up a carton of the mouth-watering salad.

Cut lettuce, half the watercress, chicory and romaine in fine pieces and arrange in a large salad bowl.

Cut tomatoes, bacon, chicken, eggs, and avocado in small pieces and arrange, along with the crumbled Roquefort cheese, in strips on the greens.

Sprinkle finely cut chives over the Cobb salad and garnish with the remaining watercress.

Just before serving mix the salad with the Cobb salad dressing. 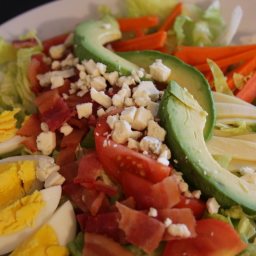 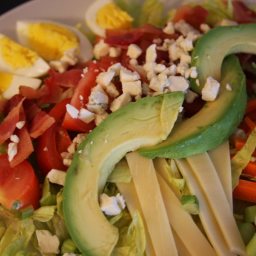 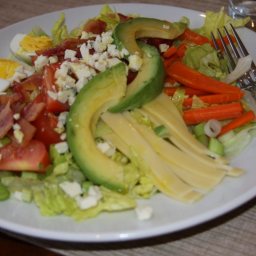 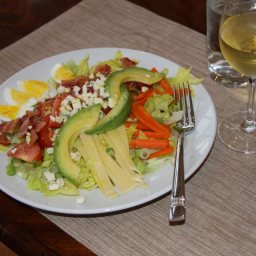 Pair with a crisp glass of Sauvignon Blanc or Chardonnay

NS1610
This is great, though in England I couldn't get Cobb dressing so used blue cheese, just as tasty!
9y
Reply
Reply

sleevesend
I love how each person can do his own thing with it, no olives for my daughter, extra for my husband. Simple blue cheese crumbles, oil and vinegar topped this classic off perfectly!
12y
Reply
Reply

stevemur
Hit the spot perfectly. One of the things I love about Cobb Salads is they can be as filling or as light as you'd like, based on what you include. I decided not to use Cobb Salad dressing, but rather made my own, with champagne vinegar, a little dijon mustard, olive oil and a dash of sugar.
12y
Reply
Reply

hotflashgame
This salad was a treat to eat. My whole family, kids included, loved it. This is the first salad in awhile that my husband and I didn't have to finish off for the kids. Great!
15y
Reply
Reply