Try this Original Recipe Kentucky Fried Chicken recipe, or contribute your own.

"In 1983, in his book BIG SECRETS, author William Poundstone hired a laboratory to analyze a dry sampling of the spice mixture. The surprising discovery was that instead of identifying eleven herbs and spices, the analysis showed only four ingredients: flour, salt, pepper and monosodium glutamate, a flavor enhancer. The cooking procedure is believed to be the other half of the secret. Colonel Sanders became famous for using a pressure cooker shortly after its invention in 1939."

Pour the oil into a pressure cooker and heat over medium heat to about 400 degrees. In a small bowl, combine the egg and milk. In a separate bowl, combine the remaining four dry ingredients. Dip each piece of chicken into the milk until fully moistened. Roll the moistened chicken in the flour mixture until completely coated.

In groups of four or five, drop the covered chicken pieces into the oil and lock the lid in place. When steam begins shooting through the pressure release, set the timer for 10 minutes. After 10 minutes, release the pressure and remove the chicken to paper towels or a metal rack to drain. Repeat with the remaining chicken.

Note: If you prefer not to use MSG, you may substitute an additional 1/2 Tbsp. of salt. Be aware, however, that using MSG produces the best clone of KFCs Fried Chicken. 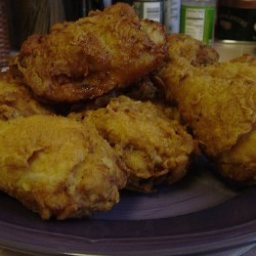 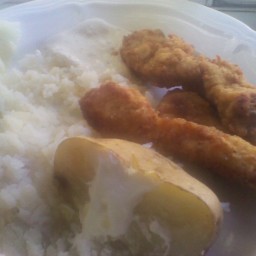 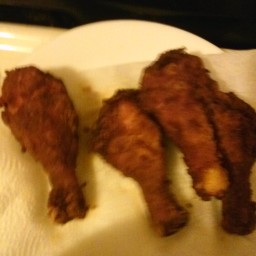 Teemah
So tasty my child loves it
8y
Reply
Reply

Sandersmatt1976
Use half the salt, perfect
9y
Reply
Reply

Dfgoddard
What type of release do you use with your pressure cooker? Cold water release??
10y
Reply
Reply

Ayebrit916
Super loved it. Am bot a really big fan of fried chicken to greasy but OMG this blew my mind of so yummy I love this recipe so far this is the only fried chicken I eat & I put less salt, I didn't use MSG & used boneless chicken breast. I will totaly be making this & it made it to my recipe book
10y
Reply
Reply

lesmat50
Yes, it is better than KFC, our whole family loved it. Thanks a lot.
10y
Reply
Reply

KED33
This is a great recipe, my family loves it. Thanks!
10y
Reply
Reply