Wash produce before use

Prep and sear the chicken

* Pat the chicken dry with a paper towel. Cut the chicken crosswise into ½-inch-thick strips; season generously with salt and pepper.

In a large sauce pot over medium heat, warm 1 to 2 tablespoons oil until hot but not smoking. Add the chicken and cook, stirring occasionally, until browned but not yet cooked through, 2 to 4 minutes. Transfer to a plate. Do not clean the pot.

While the chicken browns, start preparing the vegetables.

* Cut the mushrooms into quarters.

* Remove the stem, ribs, and seeds from the bell pepper; cut the pepper into 1-inch pieces.

* Trim the root ends from the baby broccoli; cut the broccoli into 2-inch lengths.

In the same pot used for the chicken, if dry, add 2 to 3 teaspoons oil. Warm over medium-high heat until hot but not smoking. Stir in the onion, mushrooms, and lemongrass paste, season with salt and pepper, and cook until the onion and mushrooms start to soften, 1 to 2 minutes. Add ½ cup (1 cup) water and bring to a boil. Reduce to a simmer and cook, stirring occasionally, until the liquid is thickened slightly, 3 to 5 minutes.

Add the bell pepper, broccoli, and chicken and any accumulated juices and bring to a boil. Reduce to a vigorous simmer, cover, and cook until the vegetables are just tender and the chicken is cooked through, 4 to 6 minutes.

While the tom ka gai simmers, prepare the garnishes.

Prep the lime and cilantro; finish the tom ka gai

Remove the pot from the heat and stir in the coconut milk and 1 tablespoon (2 TBL) lime juice; season to taste with salt and pepper. 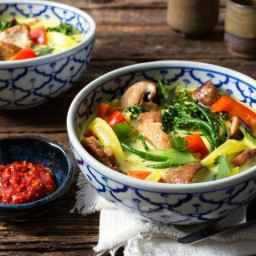