Preheat the oven to 350 and lightly oil a 8x8 baking dish.

In a large bowl, mix together 1 tablespoon liquid sweetener, melted coconut oil, egg and egg whites, and vanilla. In a separate bowl, combine the flours, baking soda and powder, and salt. Slowly add the flour mixture into the egg mixture and fold into a ball of dough.

Roll the dough up like you would for cinnamon rolls, it's going to crack and crumble but don't try and fix it. Please the rolled up dough in the baking dish and spread apart the pieces until the bottom is covered. Pour the remaining filling sauce on top and Sprinkle on chopped apple and coconut chips.

Bake for 15-25 minutes, or until the Top starts to brown and become crispy.

Optional: top with a paste made with 2 tablespoon solid coconut oil 1/2 teaspoon of vanilla, and 2 tablespoon of honey, agave, or pure maple syrup, or 1 tablespoon of granulated sweetener. Mix together to form into a paste and spread it over the coffee cake right after it comes out of the over. Let it melt and then serve :). 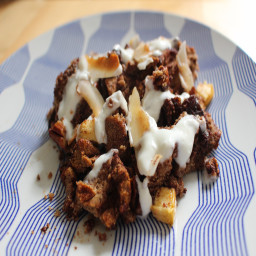