A traditional English dish, pan haggerty is essentially thinly sliced potato and onion, layered with cheese in a skillet, cooked on the stove-top over low heat and given a bubbling brown finish under the broiler. Some variations also include bacon or canned corned beef. This quick, easy to make dish is rich, filling and delicious -- it's crunchy and golden on the bottom, soft and gooey in the middle, cheesy and bubbling on the top. Leftovers will keep for a couple of days in the fridge and are great cold or reheated. I like them, at room temperature, with a simple green salad and a sharp vinaigrette.

Heat a large heavy-bottomed ovenproof skillet on the stove top over medium heat. Add butter and oil or bacon drippings. Once melted, swirl to combine, then remove skillet from heat and begin layering potatoes, onions and cheese into skillet, starting with potatoes and ending with cheese. Season each layer of potato and onion with a bit of salt and black pepper.

Return skillet to burner, cover with lid, and reduce heat to medium low. Cook, covered, until potatoes and onions are crispy tender when tested with the tip of a sharp knife, about 25 to 30 minutes. Preheat broiler about 5 minutes before end of cooking time.

Uncover skillet and sprinkle with additional cheese, if desired. Transfer skillet to broiler, and cook until top is nicely browned and bubbly. Remove from broiler and let sit for a few minutes before serving from the skillet. Serve with a dollop of sour cream, if desired. 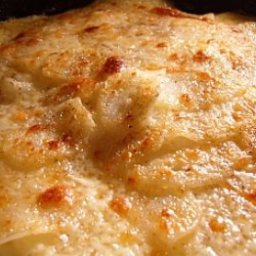 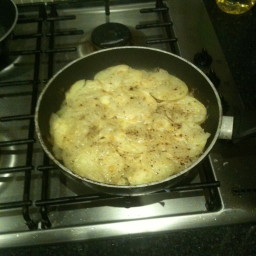 BRILLIANT!!!!! I'm a novice and it worked perfectly, tasted like heaven!! 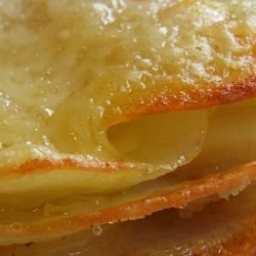 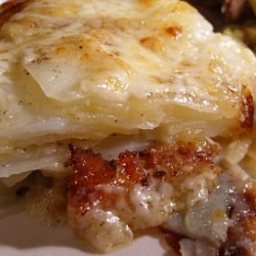 cook368
This was easy and tasty! Used Gouda cheese and ham in this recipe.
10y
Reply
Reply

Gizmod420
It's actually called "Pan-anglty" and is a leftover from the war , when rations only gave you a bag of onions, potatoes , and a can of corned beef .
10y
Reply
Reply

shilohann
My stepsisters grandmother was English and often made this for use when we were kids. I served this with our pork chop dinner and it was a HUGE hit! Thank you so much for this delicious recipe.
11y
Reply
Reply

Lauralauralor
this was so simple to make and tasted amazing!
11y
Reply
Reply

Madcowpirate
Great stuff. Used some left over pork from the night before and it worked great. Two days later we put a fried egg on top of the warmed left overs and had it for breakfast.
12y
Reply
Reply