This one isn't really that similar to any of the 'Chile Relleno' recipes I've seen; but I decided to give it something different. Local sources turned up no Poblano peppers, so we got a coupe of nice-sized Pasilla's. It turned out really well, lots of flavor and less than 300 calories (about 7 WW points). Serves 2.

Pre-heat the broiler, and place the peppers on a cooking sheet

Put the cooking sheet about 4" from the broiling element

Broil the peppers for about 15 minutes, turning several times to uniformly 'blister' the skin.

Remove from the broiler and place the peppers in a covered pan, allow to cool for 15 minutes

Cut off the stem end and remove the seeds

If you wish, you may also remove the skin (I didn't bother)

Heat the EVO in a large skilletPut the mushroom, onion, tomatoes and green chile in the skillet and simmer for 10 minutes

Sprinkle Cilantro and Taco seasoning into the veggies and stir

Pour the egg/hummus/yogurt blend over the peppers

Cover the pan and cook until the eggs are firm

Spoon onto plates (it defies a 'neat' presentation!)

Top with a sprinkle of Paprika, Turmeric, and serve!

If you like a bit more bite (I do), sprinkle your favorite hot sauce over the serving! 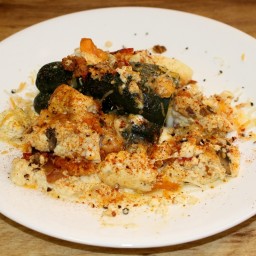