Mix yeast, sugar, and warm water in quart container to proof. I use a cooking thermometer to be sure the water is between 100 and 110 degrees F. If it does not at least triple in volume after several minutes, start again with fresh yeast.

Scald milk in a saucepan (bring to almost, but not quite, boiling). Reduce heat and add sweet butter or lard. After it's melted, cool to lukewarm. You may place the saucepan in a bowl of cold water. Replace water frequently until the milk mixture is lukewarm.

In a mixer, use the whisk attachment to lightly beat three eggs, then add sugar and salt. Beat well.

Change mixer to dough hook attachment. Add the milk mixture. Add the yeast mixture. Slowly mix in 4 1/2 cups flour. Be sure the ingredients are thoroughly mixed, especially at the bottom of the mixing bowl. Beat the dough until it blisters, five minutes on medium speed.

Lightly grease a large bowl, at least twice the size of the dough. Put dough in the bowl. Cover lightly with plastic wrap. Place in the refrigerator overnight. (In 2018, I bought three rounded leftover containers, about one quart in size, and divided the mixed dough into thirds. After lightly greasing each container, I put a third into each container. I wrapped the lid with a damp flour-sack towel rather than sealing it tightly., then put each container into the refrigerator for the overnight rise. It was much easier to grab the dough and roll out each third the following day.)

Approximately three hours before baking, lightly flour hands, rolling pin and rolling surface (such as a marble pastry board). Remove a third of the dough from the refrigerated bowl. Form into a ball, then roll into a circle about 9" in diameter. It should be about 1/4" thick. Using a pastry brush, coat top of dough with melted salted butter.

Using a pizza cutter, slice dough in half, then half again, etc., until there are 16 wedge-shaped pieces. Roll each piece by beginning at the wide end. Stretch the wide end a bit as you start to roll it. Place roll on lightly greased cookie sheet. Using a pastry brush, coat roll with melted salted butter. Repeat for other two-thirds of dough.

Preheat oven to 425 degrees for at least 30 minutes. Bake for about 6 minutes or until they are lightly golden on top. They burn VERY easily.

I usually double this recipe (so I bought and divided the dough into six containers). 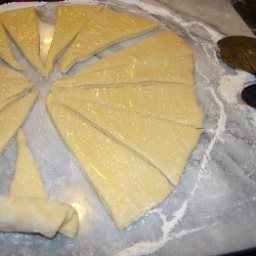 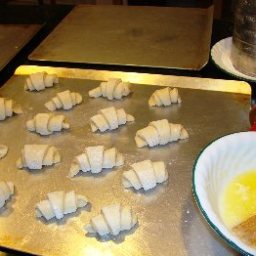 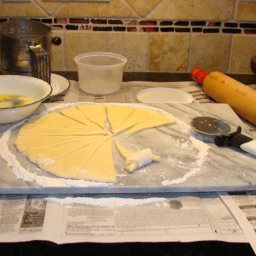 Roll out the dough, top with butter, cut into 16 wedges with the pizza cutter, and roll into shapel 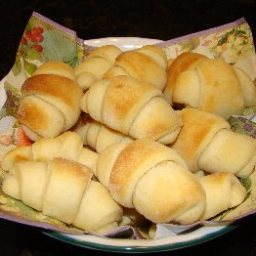 TripleToys
[I made edits to this recipe.]
12y
Reply
Reply

TripleToys
These have a staple of family holiday meals since I can remember. One year, someone brought a different roll to Thanksgiving, and there was almost a riot! JK
13y
Reply
Reply