To me it was all worth the work!!!

Combine all ingredients in processor; blend until mixture resembles moist crumbs, about 1 minute.

Transfer to 9-inch-diameter glass pie dish and press mixture onto bottom and up sides (not rim) of dish.

Remove from oven; press crust with back of spoon if puffed.

Whisk sugar, cornstarch, and salt in heavy medium saucepan until no lumps remain.

Gradually whisk in cream, then milk.

Add yolks and scrape in seeds from vanilla bean; whisk to blend.

Cook over medium heat, whisking constantly, until pudding thickens and boils, about 5 minutes.

Add butter and stir until melted.

Chill until filling is cool, about 1 hour.

Beat in vanilla, then peanut butter.

Beat cream in another medium bowl until firm peaks form.

Fold large spoonful of whipped cream into peanut mixture to loosen, then fold in remaining cream in 2 additions.

Chill at least 3 hours. DO AHEAD Can be made 8 hours ahead. Keep chilled.

Sprinkle peanut brittle over bananas, if desired, and serve.

Serving idea: Came out more like banana pudding after chilling 3 hours -- was perfect consistency the next day, though. This is a perfect recipe for those who love peanut butter and banana sandwiches. The only downer was that it took quite awhile to make, due to having let the different layers cool. I would def. make it eight hours ahead of time. I also would coat the top layer of bananas with orange juice as they will brown. 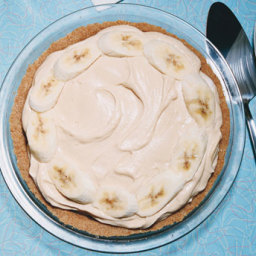