It is without question, one of my most favorite meals, a death row meal if you will. If you search the net for the history of pho, you are likely to hear and read as many versions of it origination as there are versions of this recipe. From my research experience, it appears that this soup originated as a possible result of the French influence and the recipe itself is quite possibly over 100 years old. But no matter the debate as to it's origin, one fact seems to be universally agreed upon, pho is a phenomenon that isn't a fad to fade anytime soon.

Making pho can be a rewarding experience but it can also be very time consuming. Looking through the internet will reveal that many have taken the recipe and slimmed down the work and cut corners to a more "modern" or quicker versions. I have not tried these as I am by in large, a traditionalist. That is to say, I believe that some things should never change at least not drastically. I am not avert to change, I just don't think this recipe should change.

Start by sticking the whole cloves into the onion. Place onion and ginger root on grill and lightly char. We are not trying to burn here, more like grilling the pieces so don't rush this part. You can also do this over a burner or under a low broil setting in the oven. Just keep watch over them so they don't burn. When charred, set aside.

Combine the coriander seeds, star anise, and cinnamon stick in a small skillet. Toast the spices over medium heat tossing and stirring gently ever so often so they do not burn. Do this until slightly browned and fragrant. Set aside.

In a large pot (I use an 8 qt stock pot which is just barely big enough) place the bones and enough cold water to cover. Bring to a boil and boil vigorously for about 4 minutes. Turn heat off and pour bones, beef shank and water into a colander and drain bones. Wash pot out completely and dry. Carefully rinse off bones and shank of any scum or impurities with cool water and place back in pot. Fill again with cool water and add the ginger, onion, yellow rock sugar, fish sauce and spices and bring back to a boil. Turn heat down immediately and simmer for an hour. Remove beef shank after one hour and submerse in a bowl of cold water (I add ice to make it really cold). This will congeal the fat and juices in the beef. Let cool for about 15 minutes and drain, wrap in plastic wrap and refrigerate.

Keep simmering the rest of the broth for about 3 hours more. the actual simmer time depends on patience. There are stories told of traditional Vietnamese cooking methods that let this broth simmer for 24 hours over charcoal fires. I would do this as well, if I had a decent charcoal fire and 24 hours to watch it. When the simmering is complete, turn off your heat and using a slotted spoon, remove bones, spices, onion and garlic and discard them. Strain the broth through a fine mesh strainer (use cheese cloth if your strainer isn't fine enough) and after the pot has cooled a bit, place pot of strained broth into the refrigerator. The next day, you will notice some of the fat has congealed on the top of the broth. Skim the fat off with spoon and discard. Your broth is now ready to be used. It can be frozen for a later use, or used right away.

Okay, at this point you should have what amounts to a stockpot of broth that has been skimmed of it's fat. Sometimes the broth will take on the characteristic of Jello when it's chilled, which is a good thing. It means that you were able to extract all of the good stuff from the bones which directly relates to flavor.

Begin by heating the broth. Meanwhile, assemble a garnish plate of the sprouts, cilantro, basil, peppers, and limes. I use a standard size dinner plate but you can do this on smaller plates for each person if you choose. On another plate I usually squeeze off enough Sriracha and Hoisin Sauce to cover each half of a small plate for each guest. This way the can dip whatever they want without fear! You may also leave the bottles on the table for refilling. Place the sliced onion in a small shallow bowl and cover with the vinegar. Place a pinch of salt and stir gently. You can do this ahead of time by as much as an hour or so and let sit at room temp.

Cook the noodles as per the instructions. Rice noodles cook slightly different than Americanized pasta so if it's your first time, you need to pay attention to cooking times and doneness. I usually cook them by boiling water and the pouring the water over the noodles in a bowl and then letting them sit for about ten to fifteen minutes. Then I rinse them under cold water and drain keeping them close at hand for serving. If you use this method, you want to make sure you have pot of boiling water at hand to quickly re-heat the noodles prior to plating (or bowling as the case may be). You can also use this boiling water to pre-heat your bowls because no one likes a cold bowl of pho.

Before you assemble the bowls, drain the onions. Add to the bowl some of the re-heated noodles on the bottom, some of the now pickled white onions, sliced cooked beef, sliced raw beef, and some of the scallions. Add the very hot broth to the bowl. This will cook the beef giving it a slight gray appearance.

Eating pho is a personal process. Some add sauces such as fish, Sriracha, or Hoisin directly to the broth. Add a few leaves of basil and cilantro at a time. Adding to many cool things will cool the broth so use your herbs wisely. 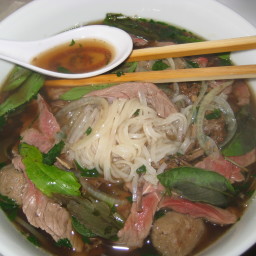 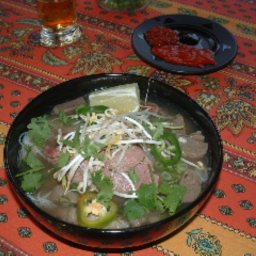 OaxacaCookin
This is the Pho recipe that takes me back to the Authentic pho shops. There are no shortcuts to achieve a great bowl of Pho and the author of this recipe understands. This will cure what ails you and wrap you in the most aromatic steam you've ever experienced. Thank you for sharing such a great recipe. It came out exactly as I remember great pho being.
9y
Reply
Reply

JRowan
If you would like more info, go to http://casadebellacat.blogspot.com/
13y
Reply
Reply

JRowan
A slow simmer is key. If you over boil the stock, as with any stock, you increase the number impurities in the finished product. [I posted this recipe.]
13y
Reply
Reply