This is based on a recipe I found in a church cookbook.

1/4 cup flour, salt and pepper. Shake baggie to mix. Add the stew meat to the baggie and toss, making sure all the meat gets coated with flour.

Put 2 tablespoons of oil in a heavy oven-safe pot with a tight fitting lid. I use a number 9 lidded iron skillet. Put the coated meat in the pot or skillet and put it in the oven after making sure your oven shelves are adjusted so the stew can cook in the middle of the oven. Set a time for 30 minutes and stir the meat every ten minutes while you are preparing your vegetables.

Stir to mix well and when the meat finishes browning add the vegetable mixture to the meat and stir to mix. Place the lid on the pot and reduce heat to 375 degrees. Cook for two hours or until meat is tender. Do not raise the lid during cooking time. Add salt and pepper to taste before serving. Serve with cornbread. 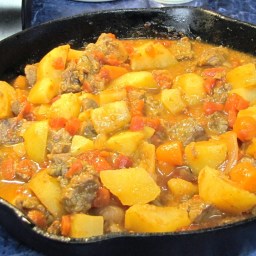 GrammyWindy
Husband loved it!! Made a lot for the two of us, but we did enjoy it! Added to favorites
4m
Reply
Reply

adacooks
this is really good. I actually dislike beef stew, but my hubby loves it, so i make it for him on a regular basis. THIS is the FIRST beef stew that I have liked in 30 years of trying every recipe under the sun!
8y
Reply
Reply