Sweet fruit blended with heat. Use on toast or crackers with cream cheese or as a condiment with meat. Goes especially well with chicken or pork.

I had previously screwed around with a pineapple-hab jam until the recipe was perfect... then I moved and can no longer find my notes. This is me starting from scratch again.

One lesson I learned from prior attempts was that fresh pineapple just doesn't seem to set very well. I had to cook the crap out of it and add a bunch of lemon juice before it would play nicely with the pectin. Canned pineapple on the other hand seems to set perfectly well. Although I prefer fresh ingredients over canned, it just wasn't worth the hassle.

You will need to sterilize your jars. The recipe will make approximately 10 half pint jars or the equivalent (sterilize extra for unexpected excess). The jars need to be hot from the sterilizing process when you fill with jam. Put the sealing lids in boiling water near the end of the process and remove individual lids as required.

Seed, de-vein and roughly slice the orange pepper. Seed and de-vein the habaneros. I like to leave the veins and seeds from 2-3 habs intact to increase the heat. If you want to tone the heat down a little then leave all seeds and veins out or decrease the number of peppers a bit. If you REALLY want to tone the heat down... well why the hell are you making this jam? This isn't Grandmas jalapeno jelly recipe.

Dump all the peppers and the pineapple into a food processor. Process until it until slightly chunky. It shouldn't have hunks of anything... unless you want it to, then go for it!

Transfer to large pot and add sugar, vinegar and salt and stir until blended. Heat to rolling boil for about 3 minutes, stirring constantly. Add lemon juice and both packets of pectin. Follow directions on your pectin packet but I brought mine back to the boil for 5 minutes then removed from heat. Stir occasionally but not too much. To test whether it will sufficiently set, chill a plate then place a small amount of jam on it. The jam should soon be reasonably firm with a wrinkled skin. If it is too runny then check the directions on your pectin. You can also bring back to the boil and keep adding lemon juice until it sets (testing as previously described). Remove from the heat while you test.

Immediately (while the jam is hot) transfer to your jars in batches. Leave 1/4" space from the lid. Ensure the jars are still hot/warm. Do not put hot jam in a cold jar! Take your lids from the boiling water and place on top of a cleaned rim. Close with sealing ring. Complete for remaining jars.

Within an hour or so you should start to hear the lids popping. This indicates they are sealed (it's also very satisfying). If some have not popped, gently push down on the lid. If it pops back and the jar isn't warm any more then it hasn't sealed. You can either put it in the fridge and use it immediately or try again to seal it. I have successfully immersed the jar (not over the lid) in boiling water to raise the jam temperature. This often results in a seal. Alternatively, you can empty the jam back into a pot and try again with hot jam.

A final note. Many people insist you have to immerse the jars in a boiling water bath to properly seal the jam. I personally never do this and don't know anyone who does for jam. HOWEVER, this is entirely up to you and if you are at all concerned I would do the bath thing. A quick google search will bring up the process.

There will be differences in the size of peppers that may influence how your jam sets. The amount of seeds may also affect this. Follow the directions on your pectin regarding quantity of sugar and when to add it, etc. You may need to tweak this recipe a bit to make it work for your particular situation. I have found that cooking the jam longer and adding additional lemon juice usually corrects runny batches. 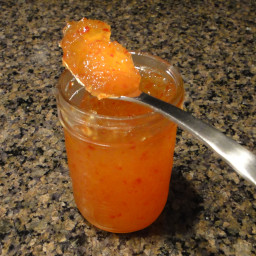 elenaputman
I really like this recipe. I've made it three times and each time it has set quite well. I made minor tweaks to suit my taste, like 16 habaneros and 1/4 cup less vinegar. I canned about 10 pineapples into quart jars, so I used that instead of the store bought pineapple chunks. It takes about 1.5 quarts pressed to get the 4 cups needed for the recipe.
1y
Reply
Reply

webjinni
This is the first time I made jam and it turned out 5 stars yummy. I learned that the 4 cups of canned pineapple took about 3 1/2 of 20oz cans. I need to work with habanero peppers with gloves on and keep the peppers under water when I cut them and what worked best was the juice of one lemon. These will be great Christmas gifts for our friends and family.
4y
Reply
Reply

darleneflynnn6e1c1
Although I didn't know if I should squeeze the juice out of the pineapple, this jam turned out awesome. Have given as gifts with happy responses. I squeezed pineapple yo get as much juice out as possible and, since I enjoy chunks too, I roughly chopped pineapple chunks and loved it. Try spreading this on a pork loin the last hour of smoking, you'll smoke your loin this way every time. Yummy!
6y
1 reply

calgaryarky 6y
Thanks for the review. I never thought about the juice but I do squeeze it out as well. I will edit the recipe to reflect that.
Reply