Try this Pizza Dough - Roman Focaccia recipe, or contribute your own.

From: Ted Taylor The following recipe is for "focaccia Romana," or Roman focaccia, from Jeff Smiths "The Frigal Gourmet Cooks Three Ancient Cuisines." He recommends it as the best dough for a pizza crust hes run across, and I must say it is both very easy and VERY good to eat. I halved the following recipe (but used the full amount of garlic, plus 2 c of meaty red sauce, about 4 oz. of pepperoni, 8-9 fresh mushrooms and 8 ounces of whole-milk mozzarella) and the results were great. Lacking quick-rise yeast, I used regular yeast and just ate a little later -- no problem there. And of course, I made the dough into a pizza instead of a plain focaccia (which is like a thick pizza (also round, but thicker) but without toppings. Dissolve the yeast in the tepid water. Add the sugar, olive oil, oil, and salt. Mix in 3 c of the flour and whip until the dough begins to leave the sides of the mixing bowl, about ten minutes [!!]. I [Smith] use my KitchenAid mixer for the whole process. Mix in the remaining flour by hand or with a dough hook and knead the dough until it is smooth. Allow the dough to rise twice, right in the bowl, and punch down after each rising. Oil 2 baking sheets, each 13 inches by 18 inches, and divide the dough between the 2 pans. Using your fingers, press the dough out to the edges of each pan. Allow to rise for about 30 minutes and brush with the crushed garlic mixed with the oil for topping. Sprinkle the rosemary and kosher salt on top. Bake at 375 degrees for about 30 minutes. File ftp://ftp.idiscover.co.uk/pub/food/mealmaster/recipes/kids.zip 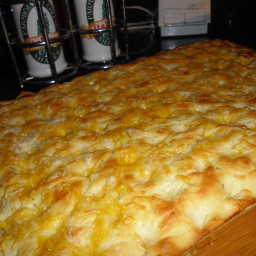 excellent recipe, thanks for sharing, CCheryl