Try this Pork Chops in Mustard Sauce (DASH Diet) recipe, or contribute your own.

1. Spray a large non-stick skillet with oil and heat over medium heat. Season the pork with salt and pepper and add to the skillet.

2. Cook the pork chops under the undersides are golden brown, takes about three minutes. Flip the pork and cook it until the other side is golden brown too, and the meat feels firm when pressed in the thickest part with a fingertip. Transfer to a plate.

3. Whisk the cornstarch into the broth. Add the milk and mustard and whisk again, set aside.

5. Transfer the pork to plates and cut each chop in half. Pour the sauce over the pork chops and sprinkle with rosemary. Serve hot.

Be careful that you cook the pork chops over medium heat and don't overcook them. 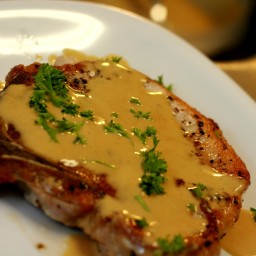