Try this Pork Loin Braised in Milk Bolognese Style recipe, or contribute your own.

If among the tens of thousands of dishes that constitute the recorded repertory of Italian regional cooking, one were to choose just a handful that most clearly express the genius of the cuisine, this one would be among them. Aside from a minimal amount of fat required to brown the meat, it has only two components, a loin of pork and milk. As they slowly cook together, they are transformed: The pork acquires a delicacy of texture and flavor that lead some to mistake it for veal, and the milk disappears to be replaced by clusters of delicious, nut-brown sauce. Note: The cut of meat specified above includes the rib bones to which the porks loin is attached. Have the butcher detach the meat in one piece from the ribs and split the ribs into two or three parts. By having had the loin boned, you can brown it more thoroughly, and by cooking it along with the bones, the roast benefits from the substantial contribution of flavor the bones make. Another cut of pork that is well suited to this dish is the boneless roll of muscle at the base of the neck, sometimes known as Boston butt. There is a layer of fat in the center of the butt that runs the length of the muscle. It makes this cut very juicy and tasty, but when you carve it later, the slices tend to break apart where the meat adjoins the fat. If you dont think this would be a problem, you ought to consider using the butt because of its excellent flavor and juiciness. Should you do so, substitute 2 pounds of it in one piece for the 2 1/2-pound rib roast. Do not have any fat trimmed away from either cut of meat. Most of it will melt in the cooking, basting the meat and keeping it from drying. When the roast is done, you will be able to draw it off from the pot, and discard it. 1. Choose a heavy-bottomed pot that can later snugly accommodate the pork, put in the butter and oil, and turn on the heat to medium high. When the butter foam subsides, put in the meat, the side with fat facing down at first. As it browns, turn it, continuing to turn the meat every few moments to brown it evenly all around. If you should find the butter becoming very dark, lower the heat. 2. Add salt, pepper, and 1 cup of milk. Add the milk slowly lest it boil over. Allow the milk to come to a simmer for 20 or 30 seconds, turn the heat down to a minimum, and cover the pot with the lid on slightly ajar. 3. Cook at a very lazy simmer for approximately 1 hour, turning the meat from time to time, until the milk has thickened, through evaporation, into a nut-brown sauce. (The exact time it will take depends largely on the heat of your burner and the thickness of your pot.) When the milk reaches this stage, and not before, add 1 more cup of milk, let it simmer for about 10 minutes, then cover the pot, putting the lid on tightly. Check and turn the pork from time to time. 4. After 30 minutes, set the lid slightly ajar. Continue to cook at minimum heat, and when you see there is no more liquid milk in the pot, add the other 1/2 cup of milk. Continue cooking until the meat feels tender when prodded with a fork and all the milk has coagulated into small nut-brown clusters. Altogether it will take between 2 1/2 and 3 hours. If, before the meat is fully cooked, you find that the liquid in the pot has evaporated, add another 1/2 cup of milk, repeating the step if it should become necessary. 5. When the pork has become tender and all the milk in the pot has thickened into dark clusters, transfer the meat to a cutting board. Let it settle for a few minutes, then cut it into slices about 3/8 inch thick or slightly less, and arrange them on a warm serving platter. 6. Tip the pot and spoon off most of the fat there may be as much as a cup of it being careful to leave behind all the coagulated milk clusters. Add 2 or 3 tablespoons of water, and boil away the water over high heat while using a wooden spoon to scrape loose cooking residues from the bottom 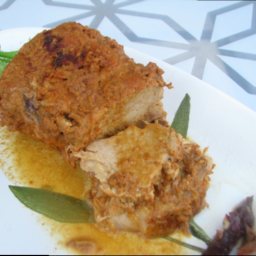