I know, most crock pots say NOT to add too much water but I want leftover juices to make gravy later on in the week--This makes LOTS of GOOD gravy juice.

Salute the onion, celery and carrots in a little oil in a large skillet until everything''s a little brown.

Remove the veggie''s; set aside.

Using the same skillet, brown the roast on all sides. remove the roast and place it into a large crock pot, along with the sauteed veggie''s.

Deglaze the pan with a little water (or wine), scraping up all the browned bits of meat and veggie residue.

Pour the juices into the crock pot and cover the roast with water (about 1 inch higher than the roast).

I know, most crock pots say NOT to add too much water but I want leftover juices to make gravy later on in the week--This makes LOTS of GOOD gravy juice.

Once the meat and veggie''s are done, remove them from the crockpot to your serving platter.

Skim the fat from the juices or use a fat-skimming cup to remove it.

I only use as much of the broth as I need to make gravy for that meal. I thicken it with arrowroot and water. I divide the rest of the cooking juices and place it into containers (unthickened) and freeze it so I can make gravy anytime I want (meatloaf, etc). Don''t be afraid to make that much broth at once, trust me, it''s very flavorful, and it won''t sog up the roast one bit. 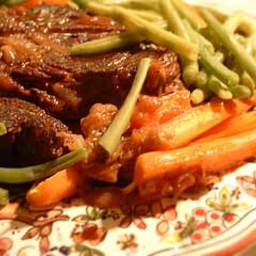 Enigmaa
No instructions on what to do with onion soup mix or kitchen bouquet.
3y
Reply
Reply