Most of us are familiar with slow cookers and rely on them from time to time when we want a home cooked meal that requires very little effort. There are many reasons to love a slow cooker. Speed is not one of them.

A pressure cooker, on the other hand, can do just about everything a slow cooker can in a fraction of the time. The basic idea is the same: throw meat and vegetables in a pot, add seasonings and enough liquid to cover the ingredients, put on the lid and walk away. But instead of walking away for 4-8 hours, like you would with a slow cooker, a pressure cooker gives you just enough time to change out of your work clothes and sort through the junk mail before dinner is done. In about 30 minutes a whole chicken or several pounds of tough stew meat are transformed into a meal that will melt in your mouth, rich with flavor and perfectly cooked. In an hour, an entire pot roast will fall apart with tenderness.

A pressure cooker is locked shut and seals in all the water vapor that rise up from the simmering liquid and ingredients in the pot. The increased pressure increases the cooking temperature and triples the amount of heat transferred into the meat while it cooks. This tenderizes meat at a remarkably fast rate. Using a pressure cooker is also an efficient way to cook stock, as the high temperature will coax flavor and collagen out of bones in record time. Just add your bones and animal parts, throw in a few cups of chopped carrots, celery and onion, plus enough water to cover everything, and cook for 35 minutes or so.

Are there any downsides to using a pressure cooker? Well, when it really gets going a pressure cooker sounds a little bit like a steam locomotive moving through your kitchen. Though if used correctly, there is no reason to fear that the pot will blow its lid and spray scalding steam across your kitchen, as some people fear. The lid of a pressure cooker locks tightly into place and can only be opened if you press a button to release the latch.

When removed from heat, the cooker slowly lowers the pressure inside on its own (or can be run under cold water to speed up the process) and will indicate when it is safe to remove the lid. Newer models of pressure cookers have all sorts of added features for safety and ease of use and are pretty much fool-proof.

If you’re one of those people who’s had a pressure cooker in your cupboard for years but have always been afraid of using it, now’s the time. Thirty-five minutes later, when you’re sitting down to a warm bowl of tender meat and vegetables, you’ll wonder why you waited so long.

2. With the lid off, heat oil in the pressure cooker over medium high heat. Brown the meat, 3-5 minutes. (The meat will brown better if you brown half of it, then remove it from the pot and brown the other half.)

3. When all the beef is browned, add the onion, carrots and garlic (and any other vegetables).

5. Put the lid on the pressure cooker, making sure it clicks into place, and turn the heat to high.

6. As soon as the pressure cooker begins to loudly release steam, set the timer and cook the stew for 25 minutes.

7. When the steam valve comes down, remove the lid. Add salt and pepper to taste. 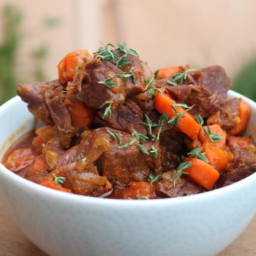 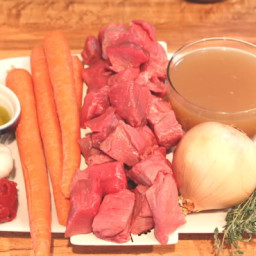 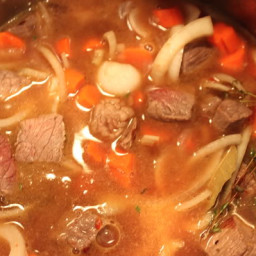