Try this Pretzel Bites recipe, or contribute your own.

2. Cut it in four equal sections.

3. Place dough bites on greased sheets. I placed five across and five down on large baking sheets.

4. Cover with plastic wrap that has been sprayed with non-stick cooking spray, and let dough rise until double in size. (about 35-45 minutes)

5. Bring a large pot of water to a gentle boil.

6. When dough has risen, plop about 10 pieces into the boiling water, tossing gently for about 45 seconds.

7. Remove with slotted spoon, and place bites on paper towels to drain slightly.

8. Move bites to greased baking sheets, and bake at 375 degrees for about 15 minutes or until done and golden brown. 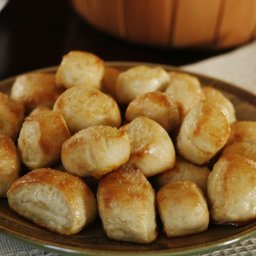 Stewdebaker
I made the cinnamon/sugar method. My kids (ages 11 & 14) are very picky. They loved these. They even asked that I make them again the next night.
9y
Reply
Reply