Try this Puff Pastry - Master Chefs recipe, or contribute your own.

This recipe produces a "double batch" for most recipes in the database. Cut all of the ingredients in half if youre only doing one recipe. Set aside about 1/2 cup of flour on a work surface. Place the remaining flour with the salt in a mixing bowl or mixer. Add 1/4 c (1/2 stick) of the butter and cut the mixture together until crumbly. Add just enough cold water so mixture can be gathered together in a ball. Cut a cross into the top of the ball, and place it in a covered bowl and chill for about 30 minutes. Place the remaining butter on the work surface with the reserved flour. Toss the butter to coat. Use the heel of your hand to work the flour into the butter then place the butter-flour mixture on a sheet of waxed paper, cover with a second sheet and press the mixture into a flat square. Refrigerate just until the butter-flour mixture is approximately the same consistency as refrigerated dough. Roll the dough into a cloverleaf shape, with 4 "leaves" extending diagonally from the center. Place the butter flour mixture in the center, then fold each "leaf" over, forming a neat, square package with the leaves slightly overlapping. Roll the dough on a lightly floured surface into a large rectangle with the short end toward you. Fold into thirds as you would a letter. Rotate the dough 1/4 turn so that the open side is at the right (this is called a single turn). Repeat rolling the dough into a large rectangle, folding into thirds and rotating 1/4 turn. Wrap dough and chill 1 hour or longer. Give the dough 2 more sets of 2 single turns, always beginning and ending with the open side at the right. Refrigerate 1 hour or longer between each set of 2 turns. After final set of turns (6 single turns in all), wrap and refrigerate dough again for at least 1 hour. Source: New Yorks Master Chefs, Bon Appetit Magazine : Written by Richard Sax, Photographs by Nancy McFarland : The Knapp Press, Los Angeles, 1985 Chef: Michel Fitoussi, 24 Fifth Avenue, New York File ftp://ftp.idiscover.co.uk/pub/food/mealmaster/recipes/mm-gc-ny.zip 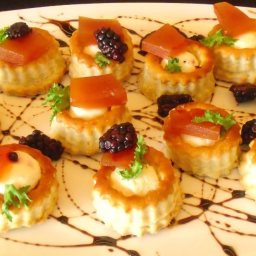 this makes some great Appetizers, great recipe thanks for sharing, CCheryl