An easy, seasonal recipe everyone can love

Grease a 10 cup bundt pan and set aside.

Add butter to mixing bowl and beat until creamy (no lumps).

Slowly add in sugar while beating. Beat one minute.

Beat in one egg at a time, allowing the first egg to incorporate before adding the second. Beat one minute, until airy.

Beat in pumpkin, sour cream and vanilla. Beat 30 seconds after each ingredient.

To make the streusel, place flour, brown sugar, butter, walnuts, cinnamon, and chocolate chips in a bowl and combine.

Let cool for half an hour. 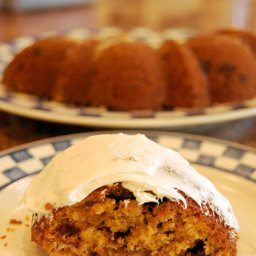 LeahMaria85
And how much chocolate chips?
6y
Reply
Reply

Kathyg67
Omg..I tried this recipe twice and came out like a big gooey mess. Don't know what i did wrong?
7y
Reply
Reply

Kathee
This was spectacularly yummy! Shared with relatives and friends....all loved it!
10y
Reply
Reply

gertiet07
This was a delicious dessert! I actually left the cream cheese frosting off for the night of dinner. The next day I warmed a bit up and added a bit of frosting, it was wonderful either way! It filled my 10 cup bundt pan and I had leftover, next time I will probably use a 12 cup. This recipe was easy and yummy.
10y
Reply
Reply

KateKunst
I usually use two 5 cup bundt cakes, because then I'll give one as a gift and my family gets to enjoy the other [I posted this recipe.]
11y
Reply
Reply