Try this Pumpkin Waffles recipe, or contribute your own.

Whisk together pumpkin, sour cream, milk, egg yolks, melted butter and brown sugar in a mixing bowl and reserve. In another mixing bowl combine the flour, baking powder, baking soda, salt, cinnamon and nutmeg. By hand, stir the dry ingredients into the liquid, and reserve. In a separate bowl, beat the egg whites until soft peaks form. Whisk one third of the beaten whites into the batter to lighten it. Then fold in the remaining whites. To make waffles, follow the manufacturers instructions on your waffle iron. Serve with maple syrup or top each with a dollop of sour cream and a sprinkling of pecans, raisins and honey. Source: The Ma Cuisine Cooking School Cookbook ~ by Linda Lloyd, Toni Mindling Schulman, Patric Terrail & Helene Siegel ~ Typed for you by Karen Mintzias 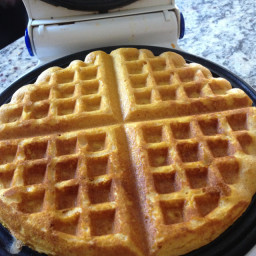 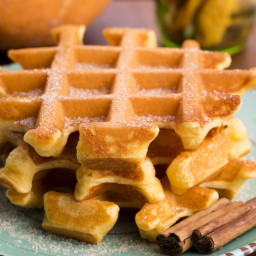 andrita2
Delicious and fluffy waffles. Easy to make and since there were only three of us, I used the serving converter and made half the recipe.
5y
Reply
Reply

donnagastin
Could I use light brown sugar? I can't get to a store that sells it
5y
1 reply

Asteroide 3y
Yes, you can
Reply