Baked in a 9x2 springform pan

Saute the onions over medium heat in a few tablespoons of canola oil. You might cover them for the first 15 minutes to get them steaming and releasing their moisture, then uncover, reduce the heat to medium low and continue cooking them until they are cooked down but not overly brown, about 45 minutes to an hour. Set them aside when they're finished.

Preheat your oven to 350 degrees. Roll out the dough to a thickness of about 1/4 inch. Place a 2-x-9-inch ring mold or a 9-inch cake pan on a baking sheet (line baking sheet with parchment if you're using a ring mold; if you're using a cake pan, line its bottom with parchment). Lightly oil the inside of your ring mold. Lay the dough into the mold — there should be plenty of dough overhanging the edges to help it maintain its shape.

Reserve a small piece of dough to fill any cracks that might open in the dough as it bakes. Line the dough with parchment or foil and fill it with dried beans or pie weights so that the crust bakes flat. After a half hour, remove the weights and parchment or foil. Gently patch any cracks that may have formed with the reserved dough, and continue baking until the bottom of the crust is golden and cooked, about 15 more minutes. Remove it from the oven and patch any cracks that may have opened; this is especially important if you're using a ring mold, or the batter will leak out. The shell should be anywhere between cold and warm when you add the batter, not piping hot from the oven.

Reduce the oven temperature to 325 degrees.

Saute the bacon gently until it's cooked as you like it (crisp on the outside, tender on the inside is best!). Drain the bacon and combine it with the onions.

In a six- or eight-cup liquid measure, combine the milk, cream, eggs, salt, pepper and nutmeg and, using a hand blender, blend until frothy. This can be done in a standing blender as well (though depending on the size of your blender, you may need to divide the quantities in half). Or you could even mix the batter in a large bowl using a whisk (beat the eggs first, then add the rest of the ingredients. The idea will be to add the ingredients in two layers, using the froth to help keep the ingredients suspended.

Layer half of the onion-bacon mixture into the shell. Pour half the frothy custard over the mixture. Sprinkle with half the cheese. Layer with the remaining onion-bacon mixture. Refroth the batter and pour the rest into the shell. Sprinkle the remaining cheese over the top. You may want to put the tray with the quiche shell into the oven and pour the remaining batter into it there so that you can get every bit of batter into the shell. You can even let it overflow to make sure it's up to the very top. Bake in the 325 degree oven for about an hour and a half, or until the center is just set (it may take as long as two hours, but don't overcook itthere should still be some jiggle in the center).

Allow the quiche to cool, then refrigerate it until it's completely chilled, eight hours or up to three days.

Using a sharp knife, cut the top of the crust off along the rim. Slide the knife along the edge of the ring mold or cake pan to remove the quiche.

Slice and serve cold, or, to serve hot, slice and reheat for ten minutes in a 375 degree oven on lightly oiled parchment or foil. 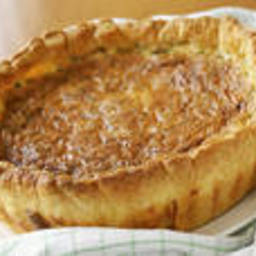