In a mixing bowl or mixer, roughly combine the flour, salt and butter, breaking up the butter slightly (there should be visible chunks). Gradually add just enough cold water to hold the dough together. DO NOT OVERWORK.

Transfer the dough to a lightly floured work surface and roll it into a rectangular shape about 9 by 12 inches. Dust the board, dough, and rolling pin with flour as often as necessary to prevent sticking. Starting with the closest short end, fold the dough into thirds as you would a letter. Rotate the dough so the open side is at your right. Repeat, rolling the dough into a rectangle, folding it into thirds and rotating is as before. Wrap the dough in plastic wrap and chill for at least 1 hour. 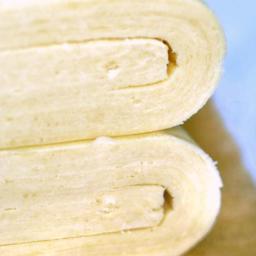 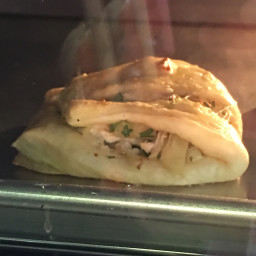 croconoll
It took a bit longer than 45 mins as i had to wait for 2 hours for cooling so it was 2 hours 45 min. otherwise no problem. will use again. Nice.
5y
Reply
Reply

StarBlaze23
OK so I used this puff pastry recipe because I enjoy making everything from scratch. There was not to much butter although if you're health concious ease it up a little. I used this pastry dough to make beef wellington from chef Gordon Ramsey's recipe. It couldn't have turned out better and although a lot of work, it was well worth it. I even had fun making it. Highly recommended if you're adventurous and cook from scratch like I do. Well done recipe poster. :)
5y
Reply
Reply

sprklz123
it's easy and simple which is exactly what I'm looking for :D
6y
Reply
Reply

Tummyrub
Was a wonderful pastry. I actually used it in the bread mixer to wrap my sausages in. A little tuff fir them but the pastry was excellent thankyou for sharing
8y
Reply
Reply