Recipe and photo by Budget Bytes

1.In a small pot, bring 2 cups of water to a boil. While you are waiting for the water to boil, wash and slice your veggies. Once the water is boiling, add the dry noodles and cook according to the package directions (boil about 5 minutes). Add the seasoning packet (or half a packet if you prefer less sodium) and stir until dissolved.

2.Turn the heat down to medium and stir in all of your fresh veggies. Allow them to sit in the hot (not boiling) broth for 1-2 minutes or until slightly softened.

3.Make a well in the center of the pot and crack the egg into it. Allow the egg to poach in the broth until the whites are solid but the yolk is still runny. Alternatively, you can break the yolk and stir the pot just slightly to yield egg ribbons like in egg drop soup. The water should not be boiling at this point or else your egg will dissolve into such small pieces that it will just give you a cloudy broth.

4.Pour the soup into a bowl and serve 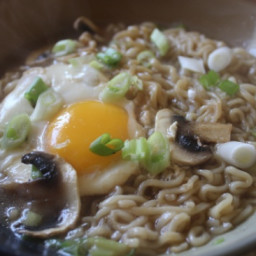 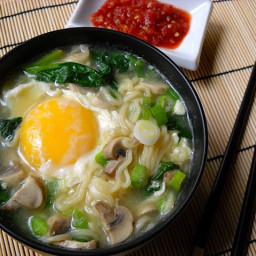 kevamos22
Simple recipe and easy to add further ingredients to such a recipe.
5y
Reply
Reply

cprior123
Had no veggies and made it in a rush, but the result was delicious! Can't wait to try with spinach.
6y
Reply
Reply