2. Bring the quinoa and stock to a boil. Cover and simmer until the liquid is absorbed and the grain looks translucent, 12-15 minutes. Fluff with a fork.

3. Drizzle the bell pepper halves with EVOO and season with salt and pepper. Roast, cut side down, until the skins just begin to char and the peppers begin to get tender, about 15 minutes. Remove from the oven and cool to room temperature. Arrange in a baking dish cut-side up.

4. Meanwhile, heat three tablespoons of EVOO over medium-high heat. Add the garlic, onion and chile paste. Season with salt and pepper. Cook partially covered until tender , 10-12 minutes. Add the herbs, mushrooms, zucchini and tomatoes, and combine with the quinoa.

5. Fill the pepper halves with the quinoa mixture and drizzle with EVOO. Cool and chill for a make-ahead meal.

6. To serve, roast in a 375 degree oven until the peppers are hot through. Serve the pepper halves topped with lots of cheese crumbles and cashews. 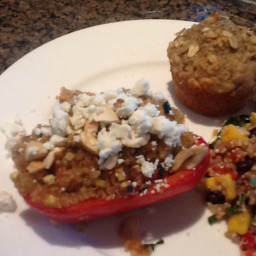