I live in Austin, Texas and there are many Mexican and Tex Mex restaurants in the area. All of them offer the standard Mexican sauces like red and green salsa and Pico de Gallo. They wouldn't survive here long if they didn't. For those who consider themselves connoisseurs there is a "Hot Sauce" competition somewhere in Texas every month. We Texans love it hot.

The cookbooks and the Internet are full of recipes for these salsas. But one of the sauces that is often overlooked in favor of its more popular cousins is "Ranchero Sauce". Ranchero sauce is not the same as salsa. Both are cooked sauces and both use similar ingredents, but they are not similar in taste. Salsa's feature a strong tomato taste, ranchero sauce has more onion flavor.

According to Rick Bayless, you can almost bet that anything ranchero or "a la ranchera" will come in a coarse, picante tomato sauce-what you might expect for "ranch" style. The picante can be little serranos (or habaneros in Yucatn), dried chiles de rbol, even chipotles or long green chiles-whatever happens to be the regional choice or the find of the moment.

Place the tomatoes in boiling water for 12 -15 seconds. Just enough to have the tomato skins crack. Then remove the tomatoes from the liquid and remove their skins. Roughly chop the tomatoes. Put all of the ingredients including the garlic and olive oil into a pan and simmer for 50 -60 minutes or until the peppers and onions are soft. If the sauce is to thin for you, cook longer, if it''s to thick add a little more vegetable stock.

Add the crystal hot sauce if you like to brighten up the flavor.

This should not be a firey hot sauce, just enough heat to let you know that it''s a mexican sauce. 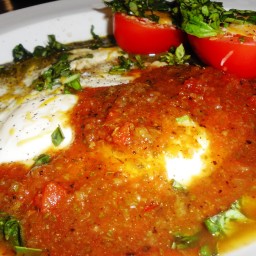 this is a great sauce, thanks so much for sharing, CChery

CCheryl
wow this would be real good on chile rellenos, yummerz, cant wait to try it thank you for the recipe.
12y
Reply
Reply

fish5er
[I made edits to this recipe.]
16y
Reply
Reply

fish5er
[I made edits to this recipe.]
16y
Reply
Reply