These are delicious and great for the summer months when you go camping. Great as a fun activity with the children. The chocolate covered marshmallows are delicious! You can cut them in your favorite shapes.

In sauce pan, heat 1 cup of frozen raspberries for about 2-3 minutes on med heat. Mash the raspberries with a fork. They will reduce to about 1/3 cup of raspberry puree. Strain (I didn't bother and left the seeds in). Let cool. Combine the gelatin and 1/2 cup of cold water in the bowl of an electric mixer fitted with the whisk attachment and allow to sit while you make the syrup. Meanwhile, combine the sugar, corn syrup, salt, and 1/2 cup water in a small saucepan and cook over medium heat until the sugar dissolves. Raise the heat to high and cook until the syrup reaches 240 degrees F on a candy thermometer.Remove from the heat. It is at this point that you can add the raspberry puree to the gelatin.

With the mixer on low speed, slowly pour the sugar syrup into the dissolved gelatin. I poured the syrup slowly unto the side of the mixer bowl. After I had poured it all, I then put the mixer on high speed and whipped until the mixture was very thick, about 15 minutes. Add the vanilla and mix thoroughly.

Sprinkle (or sift) confectioner's sugar in an 9 by 13-inch nonmetal pan that has been lined in plastic wrap.I wanted to make sure the marshmallow batter would not stick.Pour in the marshmallow batter and smooth the top of the mixture with damp hands. Allow to dry uncovered at room temperature overnight. (I didn't have patience and left it for a few hours...the top was dry and it was spongy...I thought it was ready and I cut into it!)

Remove the marshmallows from the pan and cut into squares. I put some confectioner's sugar unto a towel and inverted the pan. Roll the sides of each piece carefully in confectioners' sugar. Store uncovered at room temperature. 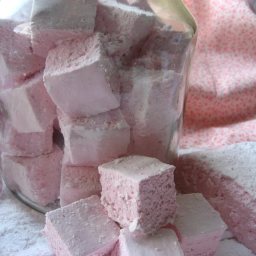 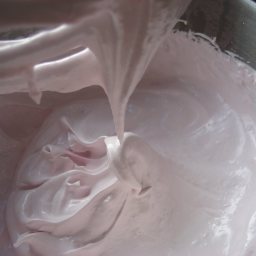 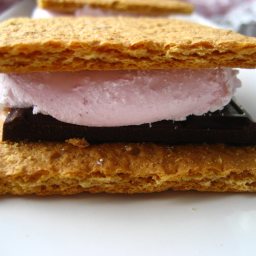 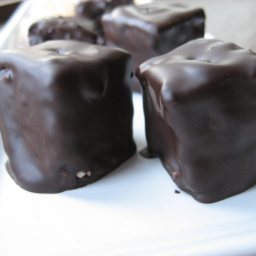 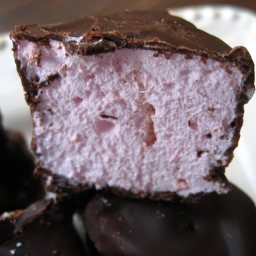 Inside the chocolate covered raspberry marshmallow...

ellie36
remember you can make your own flavor and be creative..., try them rolled in toasted coconut, your favorite nut, use sprinkles if you like, make a double batch and make them bi-colored(pink and white) etc. Dip them in chocolate and make chocolate covered raspberry marsmallows. Use them to make smores. [I posted this recipe.]
13y
Reply
Reply