This is the classic mix of eggplant, zucchini, red peppers, and tomatoes, but the fresh herbs stirred in at the end of the cooking process set this version apart. Good served hot or at room temperature, drizzled with a touch of olive oil, ratatouille travels well and tastes even better the day after it's made.

colander set over a bowl. Cover the eggplant with a paper towel and place a plate over the

towel. Weigh the plate down with a heavy can to press down on the eggplant. Let the

eggplant drain for about 30 minutes to extract any bitter juice.

After the eggplant has drained, rinse it and pat dry with paper towels.

Heat 2 tablespoons of the extra-virgin olive oil in a medium skillet over medium heat.

Add the onion and ? teaspoon of the salt. Cook the onion for about 3 minutes, until

translucent and beginning to soften. Add the garlic and cook for 1 to 2 minutes, until the

and place them in a medium Dutch oven or casserole.

Add 1 more tablespoon of the extra-virgin olive oil to the skillet. Stir in the peppers and

? teaspoon of the salt and cook for about 7 minutes, until the peppers are just beginning

Using a slotted spoon, transfer the peppers from the skillet to the Dutch oven or

skillet with the slotted spoon and add it to the Dutch oven or casserole.

eggplant, stirring occasionally. When lightly browned, add it to the Dutch oven or

Add the tomatoes to the skillet. Scrape up any browned bits on the bottom of the skillet.

Add the tomatoes to the Dutch oven or casserole, along with the thyme and black pepper.

Bring the vegetables to a simmer. Cover and cook, stirring occasionally, for about 45

Remove the lid and continue cooking for about 15 minutes. When done, the vegetables

should be soft and the sauce thick. Stir in the basil and parsley. Serve hot or at room 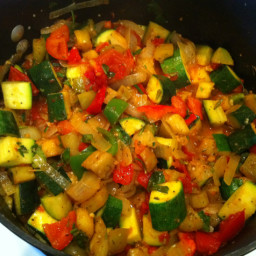 Ava79
this was amazing. the flavors just melted together. Truly a work of art! My entire family loved it.
9y
Reply
Reply