Rice and Spinach with Lemon

Rice and Spinach with Lemon

Heat butter in a 1- to 2-quart heavy saucepan over moderately low heat until foam subsides, then cook shallots, stirring occasionally, until beginning to turn golden (about 2 minutes). Add rice and cook, stirring constantly, until grains turn opaque (about 2 minutes). Reduce heat to low, then stir in broth and cook, covered, until liquid is absorbed and rice is just tender (about 15 minutes). Remove from heat and let stand, covered, until ready to use.

While rice is cooking, heat oil in a 6- to 8-quart heavy pot over moderate heat until hot but not smoking. Then cook garlic, stirring constantly, until it begins to turn golden, (about 1 minute). Add all of spinach, salt, and pepper and cook, turning and stirring with tongs, until wilted and tender (about 3 minutes). Stir in 2 teaspoons lemon juice, then add rice and stir until just combined. Season with salt and pepper, then add up to 1 tablespoon lemon juice (to taste). Sprinkle almonds over the top (optional). 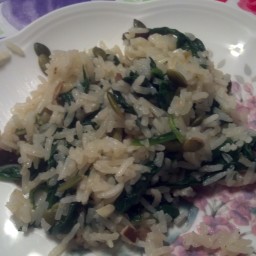 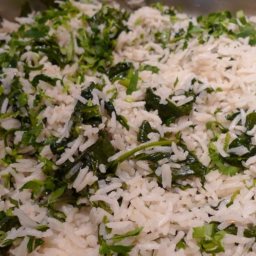 hotstuffnthekitchen
we enjoyed this dish very much and had it as a main course. We substituted pumpkin seeds for the almonds and added some mushrooms. Next time, we will top it with some parmesan cheese. Thank you for sharing.
8y
Reply
Reply

German_eagle
Made this two day ago with parmesan crusted chicken. Will have it again soon
8y
Reply
Reply

PJStephen
Love it! We have this almost weekly since first trying it, it goes very well with fish. We have substituted turnip greens for spinach and that was great as well. We also top with feta, yummy!
9y
Reply
Reply

Gazzaskitchen
We tried this dish tonight and we loved it! We liked it because it was simple to make and went well with our beef curry. Many thanks
12y
Reply
Reply