Mix sugar, cocoa and salt in heavy 4-quart saucepan; stir in milk. Cook over medium heat, stirring constantly, until mixture comes to full rolling boil. Boil, without stirring, until mixture reaches 234°F on candy thermometer or until small amount of mixture dropped into very cold water, forms a soft ball which flattens when removed from water. (Bulb of candy thermometer should not rest on bottom of saucepan.)

Remove from heat. Add butter and vanilla. DO NOT STIR. Cool at room temperature to 110°F (lukewarm). Beat with wooden spoon until fudge thickens and just begins to lose some of its gloss. Quickly spread in prepared pan; cool completely. Cut into squares. Store in tightly covered container at room temperature. About 64 pieces or 1-3/4 pounds.

NOTE: For best results, do not double this recipe. This is one of our most requested recipes, but also one of our most difficult. The directions must be followed exactly. Beat too little and the fudge is too soft. Beat too long and it becomes hard and sugary.

1 cup chopped nuts. Pour into prepared pan. (Fudge does not set until poured into pan.) 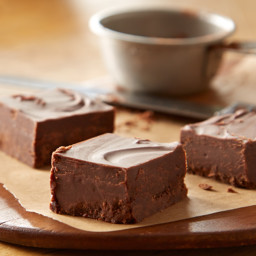 simplysue
This is the fudge I grew up eating! Turned out PERFECT.
4y
Reply
Reply