Using the cheaper cuts of meat with little or no fat, makes a nice low fat stir fry that tastes great.

Since this will be in the marinade for 3 - 8 hours a cheaper cut of steak works great.

Slice the steak into thin strips across the grain. Place the strips in a zip lock baggie and the marinade sauce in over them. Refrigerate for 3 hours minimum, the longer the better.

Once the steak has been in the marinade long enough.

Quarter the onion lengthwise and then cut each quarter in half lengthwise again. It will break apart when cooking. Slice off a quarter of the bell peppers lengthwise, remove the seeds and then cut into thin slices. Cut the green beans in pieces about an inch and a half long.

I used baby carrots because quartering them lengthwise got them to the size I wanted. You can crush the garlic if you want but I slice it, get all the flavour and easier cleanup.

Slice the mushrooms into thin slices.

Add the olive oil to a large frying pan. I prefer cast iron but that's me. The teflon coated pans only seem to last about a year before you need to replace them, my cast iron pan I've had for nearly 40 years.

When in the mood for stir fry this is what I usually make. 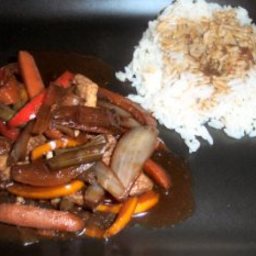 RKG1
When in the mood for stir fry this is what I usually make. [I posted this recipe.]
16y
Reply
Reply