It doesn't particularly follow either of them, but blends the interesting parts of both.

Spread potatoes on baking sheet and roast for 20 minutes.

Remove the thick bottom stem from the kale and roughly chop the leaves. Toss with chile oil (or plain olive oil), garlic, salt and pepper,

After the potatoes have roasted for 20 minutes, remove from the oven and add to the bowl of kale. Toss and then spread both on the baking sheet and return to the oven for an additional 20 minutes.

Slice grape tomatoes in half and slice the green onion into small rings. Put aside.

Make the dressing while the potatoes are roasting, but before the kale is added. Combine olive oil, lemon juice and zest, tahini, honey, garlic, cinnamon, chile flakes, small amount of grated parmesan, salt and pepper. Mix thoroughly and add a small amount of water to thin if necessary.

As soon as kale begins roasting, slice breasts into strips, preheat large skillet on medium-high and add olive oil. Fry chicken until the outside is browned. Add balsamic vinegar, soy sauce and honey. Stir the chicken often but it will most likely caramelize and stick to the bottom of the pan anyway. Once liquid is gone and chicken is cooked through remove from the heat.

The timing has to be efficient for this. Potatoes are done first, then prepare the kale, tomatoes and dressing, roast the kale then prepare the chicken. This will ensure all components are completed at the same time. 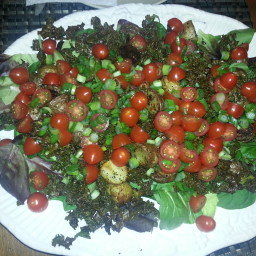