The Insalata Caprese, an iconic Italian salad. Traditionally, this salad is made with fresh mozzarella, tomatoes, and basil, then seasoned with freshly cracked pepper, salt, and olive oil. The three prominent colors; red, white, and green, are said to signify the colors of the Italian flag. My dear friend, Amanda, brought me the last of this season's harvest of Heirloom Tomatoes from Charleston, SC. These tomatoes are absolutely amazing, both in appearance and flavor! I've decided to use them to their full potential and stray a bit from the traditional Caprese salad.

Measurements aren't particularly necessary for this recipe. I sliced all my heirloom tomatoes into about 1/2" wheels, lined them up on a sheet tray, topped with garlic, salt, pepper, and a basil infused olive oil that I'd made earlier. I decided to use some basil infused oil instead of fresh basil because these tomatoes were on the small side and I didn't want them dwarfed by the basil leaves. I set the oven to 400 degrees and roasted the tomatoes for 15 minutes, checking on them every 3 minutes.

If there is an outcry, I'll be happy to do a blog about how to make fresh mozzarella from scratch, but it's a bit of a long process for most people to tackle at home without previous experience. For this recipe, I just bought smoked mozzarella from my local grocer and diced it into cubes roughly as large as I had sliced the tomatoes. When the tomatoes were finished, I began to assemble my salad alternating tomato and mozzarella until I had completed one giant wheel. There were a lot of delicious pan juices in the bottom of my sheet tray, so I poured them into the center of the plate for dipping the cheese into. You never want to waste any flavor! 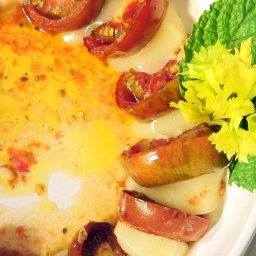 EdibleMenu
What is an Heirloom Tomato? The advent of megaagriculture in America has seen the gradual depletion of ancient varieties of native nonhybrid plants. Unfortunately for those who appreciate full-flavored fruits and vegetables, produce-seed conglomerates focus only on those strains that have mass-market appeal - which means they're beautiful and hardy, but not necessarily the best-tasting. Fortunately, about 25 years ago some dedicated individuals began saving what they could of the remaining open-pollinated (without human intervention) seed varieties, which have become known as "heirloom seeds." -Food Lover's Companion [I posted this recipe.]
11y
Reply
Reply