Combine the apricot preserves, bourbon, port, lemon juice, and spices in a small saucepan and bring to a simmer over medium heat. Cook, stirring often, until the preserves are melted, two to three minutes. Add the butter, and stir until melted. Remove from the heat.

Peel the pears but leave the stems on. With a corer, remove the core from the base of the whole pear (wide end), leaving the stems intact.

Stand the pears in a shallow baking dish and pour the sauce over them. Roast until the pears are tender and the sauce is caramelized, about 30 minutes, basting the pears with the sauce every 5 minutes.

Put one pear each in a dessert dish or plate. Spoon the remaining sauce over the pears. Serve warm with a small scoop of low-carb ice cream and decorate with a sprig of mint.

Notes: original recipe calls for bourbon instead of Southern Comfort and for the remaining sauce to be mixed with 2 tablespoons whipping cream. I like the contrast of cold ice cream with warm fruit better. White port was used in this version. Dessert served with grapefruit spoons so that pears are easier to cut.

I used Smuckers low sugarapricot preserve when I made this. Nutrient calculations include the data from that product. 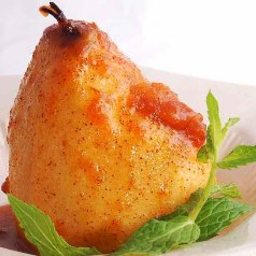 promfh
I used Smuckers low sugarapricot preserve when I made this. Nutrient calculations include the data from that product. [I posted this recipe.]
14y
Reply
Reply