1. Heat the oil in a medium pot over medium-high heat and add the onions. Cut 1 chile pepper in half, lengthwise and remove the seeds and veins. Chop the chile and add to the onions; saute until golden brown. Add the tomatoes, garlic, cilantro and salt and bring to a boil. Reduce the heat and simmer for 10 minutes.

2. Allow the chile mixture to cool, then transfer to a blender and puree until smooth. Return the puree to the pot. Seed and chop the roasted chile and add to the soup along with the lime juice.

3. Ladle soup into bowls. Then lay a Quesadilla Crouton in the soup and top with a dollop of Cilantro Sour Cream.

2. Cut the quesadillas into 1/2-inch strips. Then cut each strip on an angle to create 2 smaller strips.

Combine all the ingredients in a bowl and stir to combine. 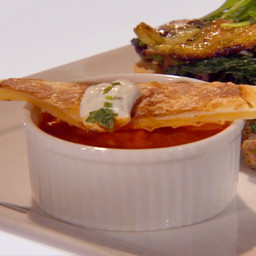