The original recipe taught me by my mother and her cousin called for the addition of Parmesan cheese stirred into rice mixture after the chicken broth had been absorbed. This creates a slightly creamy flavor, detracting (in my opinion) from the delicate Saffron flavor. I prefer the taste of Saffron to that of cheese. Both versions are quite good.

Finely chop onions. In a large skillet melt butter and cook onion over low heat until transparent but not brown, Add rice and stir to coat with oil. Cook over low heat for a few minutes until rice just begins to turn slightly brown. Meanwhile heat chicken broth in a sauce pan over medium heat, do not boil. Add enough warm chicken broth to cover rice mixture. Cook over medium heat continually stiring, adding chicken broth as it becomes absorbed until rice is cooked to a tender consistency. Add Saffron to the rice when adding the last (or near to the last) batch of broth.

IMPORTANT: DO NOT ALLOW RICE TO BECOME DRY DURING THIS PROCESS.

Add Parmesan cheese if desired and stir until blended.

NOTE: There are two varieties of Saffron. One that only colors the rice and the other which gives it both color and flavor. An easy way to distinguish between the two is price. The better Saffron is not inexpensive but well worth it. It comes in both a thread and powdered form. I believe the threads have better flavor than the powered variety. In my opinion the cheaper Saffron should be replaced with yellow food coloring which is far less expensive and produces the same flavorless color. Don't waste you time with the low price product. Rather than dissapoint Saffron lovers choose a different side dish such as pasta or potatoes. 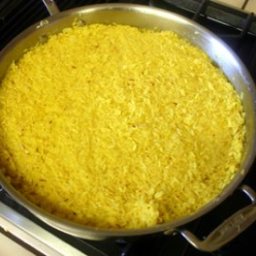 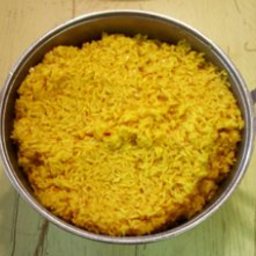 Paella with Saffron Rice ala Negri

swibirun
Made this as a side to Osso Boco tonight and it was a big hit with everyone. I cut the recipe in half and it still made a lot.
13y
Reply
Reply

stevemur
[I made edits to this recipe.]
13y
Reply
Reply

LordDrow
Will do again.. but will cut recipe down to about half.
14y
Reply
Reply

Cyrano
[I made edits to this recipe.]
14y
Reply
Reply

Cyrano
[I made edits to this recipe.]
14y
Reply
Reply

Cyrano
A very nice side dish [I posted this recipe.]
14y
Reply
Reply