Try this Sage-Buttermilk Biscuits recipe, or contribute your own.

Heat oven to 500 degrees. Combine flour, baking powder, and salt and pepper in a large bowl. Add butter, and cut into flour mixture using a pastry cutter until it forms pea-sized pieces. Stir in sage until well combined. Stir in enough buttermilk until flour mixture is moist and forms a dough. Transfer to a lightly floured surface, and knead gently until the dough comes together, about 15 seconds, being careful not to overwork the dough. Using a lightly floured rolling pin, roll the dough into an 8-inch round about 3/4 inch thick. Cut out biscuits, without twisting, using a lightly floured 2 3/4-inch round biscuit cutter. Gather scraps, and repeat rolling and cutting process, being careful not to overwork the dough. Place biscuits, pressing together gently, in an ungreased 8- by 2-inch round baking pan in a circular pattern with 7 biscuits around the outer edge of the pan and one in the center. Brush each biscuit lightly with buttermilk. Top each biscuit with a small sage leaf. Bake until golden brown, about 20 minutes. Serve warm. Makes 8 biscuits. Source: "Martha Stewart Living - 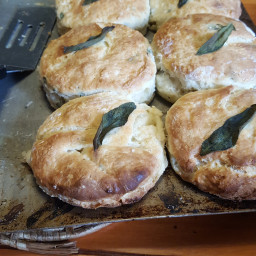