A stuffed corn tortilla with a cheese, bean, or meat filling. A food staple in El Salvador it is sold by many street vendors. Can be adapted with many different fillings.

Slowly add warm water to masa harina in a large mixing bowl, kneading the dough with your hands. If the dough is too sticky add more masa, if it is too dry and cracking sprinkle with water.

Leave the masa dough in its mixing bowl, cover with plastic wrap and place in the refrigerator for at least one hour and up to 2 days.

Lard and kosher salt can be added to the masa for a different flavor. Combine kosher salt and lard separate from the masa dough. Combine in a mixer with a paddle by first adding the lard mixture, then pieces of masa dough until combined. Rather than water, broth is used in the masa dough when making it with lard. The recipe would be the same as your favorite tamale dough.

Adding the filling to the Masa:

Form the masa dough into 2 to 3 inch balls. Using your thumb and fore finger form the dough ball into a cup, hollowing out the middle to allow you to place your filling of choice inside. Once filled, pinch the top closed, place the ball between two sheets of plastic wrap and flatten. It is okay to allow some of the filling to break through the masa dough as will will add a nice flavor and crunch ones fried.

Head a non stick pan or skillet on medium high heat. Place a quarter sized drop of olive oil on the pan or skillet for each pupusa, placing the pupusa on top of the oil. Fry on each side for about 30-60 seconds or until browned on each side.

Pupusa is traditionally served with Curtido, the accompanying slaw, which is a combination of cabbage, carrots, and onions in a vinegary, spicy brine. 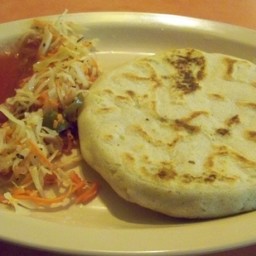