Once you start you just can?t stop. After your fifth jug the room might start to spin, but at least you?ll sleep right through your siesta. We don?t really know if it?s originally from Andalusia and the fact is, we don?t really care. It?s the number one tipple in beach bars up and down the Andalusian coastline and we love it.

Perfect drink for the summer

Serves: 4 people (or 2, depending on their alcohol consumption!)

Serving suggestion: soak the fruit in sugar for several hours

Stands out for: queen of all beach bars (chiringuitos)

Did you know? Many countries claim to have invented sangria, including England, Greece, and France

For some, Sangria is a typically Mediterranean drink, made in the countryside using natural ingredients like wine and fruit so they wouldn?t go to waste, while at the same time creating a refreshing drink to cool down after a hard day?s work. Sangria has become popular along the Mediterranean coastline - no meal is complete without a jug of the pink stuff in summer! Mediterranean cooking prides itself on using seasonal ingredients and sangria is no exception. Recipes involving a mix of water, wine and sugar go as far back as ancient Greece.

According to others however, sangria is not a Spanish drink at all. Legend has it that the British East India Company travelled to India and tried a drink known as pac which contained five ingredients referred to in its name- eau de vie, sugar, lemon, water and tea. The British took this recipe back to the West Indies and the name of the drink evolved into punch. The word punch became ponche in Spanish, used to describe sangria which is, in essence, a fruit punch. One thing is clear: the word sangria comes from the Spanish sangre meaning blood, because of its reddish colour.

Given that there is so much debate surrounding its origins (even the French lay claim to having created sang-gris) it comes as no surprise that there are a number of different sangria recipes, in the same way that many people have their own take on GAZPACHO. However the following recipe has to be our favourite.

1. Peel one orange and one lemon and carefully cut them into pieces. Soak them in their own juice with some sugar for 24 hours. This is optional but it intensifies the flavour - you can also add these ingredients once you have made the sangria. You can add seasonal fruits to the orange and lemon but make sure they are ripe to get the best results.

2. Squeeze the juice from two oranges and a lemon and mix with wine in a wide-mouthed jug. Generally, the wine used should be young with a lot of colour and a high alcohol percentage. Add a dash of cognac or rum to strengthen the flavour.

3. Add the fruit mix and sugar that was left to soak earlier. Mix using a wooden spoon.

4. Dilute with a little sparkling water and add ice.

5. When it?s ready to serve, traditionally it is poured into glasses and the wooden spoon is used to stop the pieces of fruit falling into the glass.

Some recipes also include spices like nutmeg, vanilla and cinnamon which can be added to the sugar when you soak the fruit depending on your personal taste. 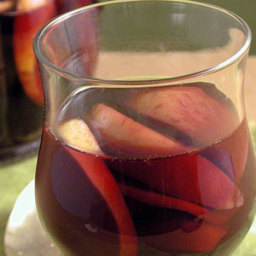 sangria (in pitcher, next to Shiraz source)

wyattj
This is a simple recipe. I would use less sugar next time, but my wife liked the sweetness.
9y
Reply
Reply