A delicious dessert or afternoon snack from the Philippines. Sans Rival is found in many Cafe's and Coffee Shops around the Philippines. It has a very buttery flavor and after you taste it, you'll be wanting more.

1) Line the undersides of three rectangular baking pans, measuring 8" x12", with aluminum foil, dull side up. Set aside.

2) To prepare the meringue, beat the egg whites with the cream of tartar until frothy. Gradually add the sugar and continue to beat at medium speed until the meringue is stiff but not dry.

3) Using a rubber scraper, fold in flour and cashews.

4) Spread the mixture thinly and equally among the prepared baking pans. Spread as evenly as possible from end to end using an offset metal spatula.

5) Bake in preheated oven (300 degrees F) for 45 minutes to an hour or until golden brown.

6) Allow to cool completely in the oven but leave the oven door slightly ajar.

7) While the meringue layers are in the oven, prepare the filling. Combine the water, sugar and cream of tartar in a thick saucepan (or Pyrex) and mix well.

8) Cook until the syrup spins a thread. Use a candy thermometer, if desired.

9) While the sugar is boiling, beat the egg yolks using an electric mixer at medium speed until the egg yolks turn thick and lemon-colored. Add the syrup in thin streams to the beaten egg yolks while beating the mixture at high speed. Chill.

10) In a large mixing bowl and using an electric stand mixer with flat beater or paddle, cream the butter until light and fluffy.

13) To assemble, place a layer of meringue on a serving plate.

14) To remove the foil, loosen and slide wafers to a flat surface.

15) Cover the surface of the first layer with an adequate amount of buttercream.

16) Sprinkle with chopped cashews. Repeat the procedure with the remaining meringue.

17) Use the remaining buttercream to completely cover the top and sides of the assembled meringue torte.

18) Run a cake comb across the top and garnish with more nuts. Freeze to allow the buttercream to firm up. Keep frozen until serving time. 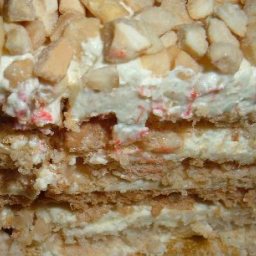 The salted pretzel brownie to rival all other sweet treats

joemokka
Cream of tartar is the common name for potassium hydrogen tartrate, an acid salt that has a number of uses in cooking. In fact, egg whites, baking soda, and milk are the only non-acidic (alkaline) foods we have. Cream of tartar is best known for helping stabilize and give more volume to beaten egg whites. If you overbeat the egg whites without the cream of tartar, the whites may break down and become watery. Whereas the cream of tartar gives you stiffer egg whites faster without overbeating. Also, make sure there is NO ( I mean NO!) traces of yolk or fat in the bowl or on egg beater, the fat will prevent the egg whites from beating, and you'll end up with a froth (like on a cappuccino) and not stiff egg whites. What I do is: I crack & separate each egg over a small bowl, then pour the egg white in the mixing bowl one at a time, then if a yolk breaks, it won't contaminate the rest of the egg whites in the mixing bowl. I would save the broken eggs for a cake or an omlet, make sure you use a clean bowl to continue cracking & separating the rest of the eggs. I hope this answers your question.
12y
Reply
Reply

anonymiss
This recipe looks great! I also came across another Sansrival recipe on www.filipinodesserts.net. Is there any difference if I don't put any cream of tartar?
12y
Reply
Reply