This sauce is made from a roux (butter and flour) and milk. Salt and pepper are always added. It is customary, in Italy, to add a pinch of nutmeg. Optionally a whole or cut onion, studded with one or more whole cloves, and a bay leaf may be simmered with the milk and then strained before adding to the roux.

In a sauce pan, melt the butter with the flour in order to make a roux, which is cooked under gentle heat while stirring with a whisk. As it is a white sauce, care needs to be taken not to brown the roux. Then heated milk is gradually whisked in, and the sauce is cooked until thickened and smooth. Add salt and pepper to taste.

The proportion of roux and milk determines the thickness of the sauce, typically one to three tablespoons each of flour and butter per cup of milk.

-One tablespoon each of butter and flour per cup of milk would result in a thin, easily pourable sauce.

-Two tablespoons of each would result in a medium thick sauce.

-Three tablespoons of each would be used for an extra thick sauce such as used to fill croquettes or as a soufflé base. 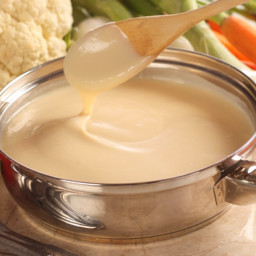