Try this Sausage, Hash Brown Casserole recipe, or contribute your own.

In a skillet, cook the sausage until browned and drain well. Combine chopped onion,, green and red pepper and saute in lightly buttered skillet. In a large mixing bowl, combine the cheese, chicken soup, sour cream, French onion dip. Fold in sauted onion, bell peppers, salt and pepper.and thawed hash brown potatoes. Mix well. Spread half of the hash brown mixture over bottom of a 9 X 13-inch greased baking dish. Spread half of the browned sausage over hash browns. Repeat layering second with rest of hash brown mixture. Top with remaining sausage add any extra cheeze as an option. Bake at 350F for about one hour or until casserole is golden brown. 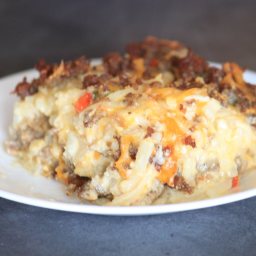