Try this Seared Tuna with Coconut Rice and Greens recipe, or contribute your own.

Pour the coconut milk, 1 tin's worth of rice and 1 tin of boiling water (use a tea towel) into the small pan.

Season with salt and pepper, stir well, cover and cook for roughly 10 minutes, stirring occasionally, then turn the heat off.

Halve the tuna lengthways, then empty the contents of the tea bags on to a board with the sesame seeds and a pinch of salt and pepper.

Roll and press the tuna in the flavours to coat, then put into the frying pan with 1 tablespoon of olive oil.

Sear for about 40 seconds on each side, then remove to a plate, leaving the pan on the heat.

Halve the bok choi, then finely slice in the processor with the trimmed asparagus and broccoli.

Put the sesame oil into the frying pan and turn the heat up to high.

Squash in the unpeeled garlic through a garlic crusher, then tip in the sliced greens. Then transfer to the frying pan.

Toss and move around for 2 minutes, then season to taste with Teriyaki sauce and remove from the heat.

Slice the trimmed spring onions and chilli and sprinkle and fold into the rice.

Slice the tuna 1cm thick and place on the dressing, drizzle with a little soy sauce.

Serve with the rice and greens. 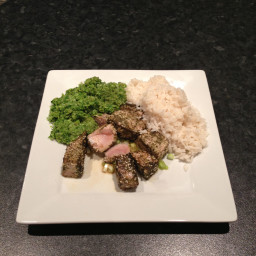