These vegetarian Scotch eggs are fantastic finger food for summer outings, and will keep for a few days in the fridge.

Put eight of the eggs in a pan of cold water. Bring to the boil, cook for 5 mins, then run under cold water quickly to cool. Once cool enough to handle, carefully peel away the shells.

Meanwhile, heat the oil in a large frying pan, add the onions and carrots, and fry very gently for about 10 mins until soft and just starting to turn golden. Add the spices and fry for 1 min more.

Remove from the heat and stir in the wholemeal breadcrumbs, miso, 2 tbsp sesame seeds, the sesame oil, coriander, 1 beaten egg and a good amount of seasoning to make a moist 'dough'.

Divide the mixture into eight equal portions. With wet hands, flatten a portion at a time on the

palm of your hand until large enough to cover an egg. Take a boiled egg and mould the mixture round to cover it, smoothing to enclose it completely. You may need to re-wet your hands from time to time, to stop the mixture sticking to them. Continue with another portion ofmucture and an egg until all the eggs are covered.

Tip the panko or dried breadcrumbs onto a plate and mix in the remaining sesame seeds.

Roll each egg first in the remaining beaten egg to coat, then the crumbs. Can be made a day ahead up to this point; loosely cover with clingfilm and store in the fridge.

Tip the extra oil into a small, deep saucepan to half-fill it, then heat until a bit of bread browns in about 30 sees. Add two or three eggs at a time and fry, turning, until really golden and crisp, about 1 min. Transfer to kitchen paper to drain while you cook the rest of the eggs 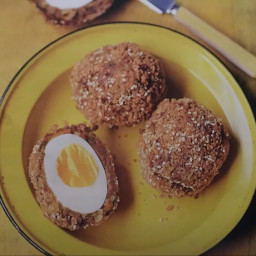