Simple recipe of shaved chocolate ice with a chile syrup. It won't actually cause death but it does involve an unexpected sneak attack of heat. Keep your head down.

Just so we're all on the same page... you have to make the chocolate ice ahead of time. You know... unless you have some just lying about the place. Fill two ice cube trays full of water and then dump the water in a pot. Heat on high. Use the best cocoa you can. I strongly recommend dark but whatever. Put the cocoa in a covered jar and add a little water to make a slurry. Put the lid on and shake. Add the cocoa slurry to the pot when it's steaming. Once the cocoa is dissolved completely and mixed, remove from the heat and cool. When it's cooled off, pour into the ice cube trays and freeze. You obviously have a bit of time while it freezes so I would recommend you read a good book, teach yourself how to knit or possibly write a short play featuring a turtle named Reuben. This step of the recipe is fairly flexible, however.

After your sweater or whatever is knitted, it's time to make the syrup. It's a 2:1 ratio of sugar to water. You can use any sugar but the flavour of demerara is the best. Add the water and sugar to a small pot. It's difficult to specify an exact number or type of chiles since they vary so much. I would recommend one hot one and one mild one (for flavour). I used one habanero (which was actually pretty mild) and one pepper from a friend's garden. Don't even know what kind it was... Use your judgement and test the peppers first. Feel free to add or reduce the number of peppers as appropriate. Anyway, slice the peppers and add to the pot. You can include the seeds if you need more heat. Throw the cardamom pods in. Heat on medium and stir frequently. Once it is boiling reduce and simmer for 3-5 minutes. If the sugar is dissolved, remove from the heat and let it steep for 30-45 minutes. Strain through a fine sieve.

To serve, chill six small glass bowls, jelly dishes, teacups, old bean cans or whatever you plan to serve in. Ok... you should really have chilled them before now. Get your act together. At any rate, it's time to "shave" the ice. This can happen any number of ways but I recommend smashing the cubes a little in a mortar and pestle, then using a food processor to finish the job. You can do it all in the food processor, put them in a bag and smack it with a rolling pin, back the car over it a few times or whatever you think will make the ice very small. Put the ice in the chilled bowls, spoon some of the cooled syrup over the top and garnish with a sprig of mint. In my mind, you should taste the cold refreshment of the chocolate ice first with a creeping hit of the sweet pepper after a few seconds. BAM!! They'll never see it coming. 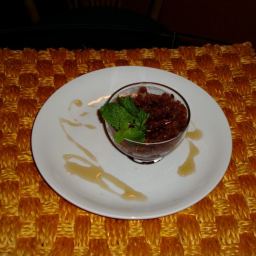