Heat the olive oil in a heavy-bottomed pot or dutch oven over medium heat.

Add the garlic and onions and saute until onions are translucent.

Sprinkle the salt and pepper on both sides of the beef.

Place the chuck in the pot and let it sear for 3 minutes until a crust has formed.

Flip the chuck and sear the second side for an additional 3 minutes. until nice and brown, almost burned but not.

Transfer the seared beef, along with the sauteed onions and garlic, to a crock pot.

Simmer the ingredients on low heat for at least four hours, or until the meat is fork tender and easily shredded.

Shred the cooked meat and place it in a hot skillet (oiled lightly), with salt and pepper and a little chopped onion. Cook until crispy on one side, don't let it dry out, and assemble a taco by placing a portion of the shredded beef on a corn tortilla, topping it with the sharp white cheddar and fresh cilantro. 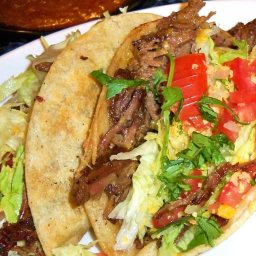 these are to die for, sprinkle the shells with parmesean for an even more unique flavor,not like it needs anymore, CCheryl 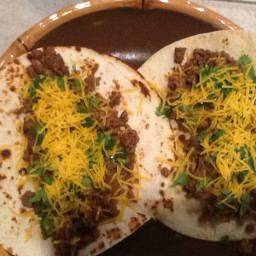 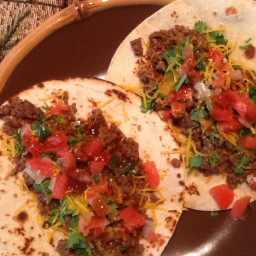 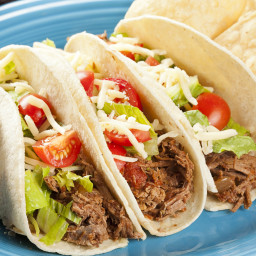 Jackiechan042003
I'm sorry to say that this didn't come out well. :/ I'm so disappointed cause it smelled great. It actually gave me a stomach ache. :/
7y
Reply
Reply

amberb4byblues
Family loved it and it was so easy. Want to try it with a beef broth next time
7y
Reply
Reply

Januaryleidig
I used beef broth and it came out just as good as everyone says. It was easy to make and made enough for leftovers :)
8y
Reply
Reply

bstrong2
Finally! I found a good recipe for shredded beef taco's. It was awesome. I was worried it was going to be to spicy but the meat was perfect. We put black beans, sriracha and guacamole on our taco's and it was sooo yummy!
8y
Reply
Reply

sheraden22
I just made this last night! used an Amber Blue Moon instead of the Modelo and i fried up the corn tortillas to make a crunchy taco and they were awesome!
9y
Reply
Reply

Happycooking22
Love this recipe! Instant favorite for our family. We substituted beef broth for the beer. The flavor was incredible! Thank you so much for sharing this recipe!
9y
Reply
Reply