Try this Shredded Meat Tamales recipe, or contribute your own.

Soak corn shucks in warm water 2 hours or overnight before using. Fry onion, garlic, cumin, chili powder, salt, pepper, and raisins (if desired) in hot oil. Add meat and water and simmer until liquid has been absorbed. Work lard, chili powder, and salt into masa; knead with hands until smooth. (Alternately, pour ingredients into breadmaker and start on "manual.") Using back of spoon, spread masa mixture thinly and evenly on inside of shuck, covering half the length of shuck. Thinly spread 1 tb filling mixture on masa-covered portion of shuck. Lap one side of shuck over the other, folding under portion of shuck which does not contain masa. Stack tamales, pyramid-fashion, on shallow steaming rack in bottom of large cooker. Add lard and chili powder to water and pour over tamales. Cover with additional shucks and steam 4-5 hours. Hint: when masa is done, it will pull away from shucks when unfolded. Sylvias notes: Stokes Green Chili Sauce with Pork, along with some shredded meat, makes a great quick filling. And I steamed a batch in my rice cooker/steamer, for 4 hours, although I think they were done after 3. It was a bit of a pain because when the timer dinged at the end of an hour, I had to remove the steamer and drip pan and refill the water base before starting it for another hour, but it was still less of a hassle than trying to keep them from burning in a big pot. I also had to clean the base pretty well, as something colored from the tamales kept working down into the water. And I think the masa needs a lot more chili powder to steam it over plain water instead of flavored water; it was pretty bland after being steamed. Source: White Wings Corn Tortilla Mix bag MM by Sylvia Steiger, GEnie THE.STEIGERS, CI$ 71511,2253, GT Cookbook echo moderator at net/node 004/005 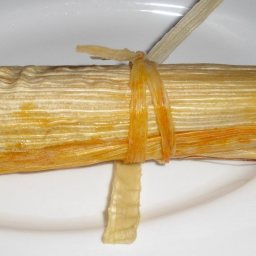