Place strained cooked shrimp in a bowl. Add lime or lemon juice, some chopped fresh jalapeno or serrano chile and/or a dash of chile powder (can also use chipotle chiles or chipotle chili powder) to desired level of heat, green onion, and cilantro. Sprinkle with salt and pepper. Let marinate for 10 to 30 minutes. Strain out the juice.

Heat a cast iron or stick-free skillet on medium high. Add a small amount of oil (about 1/2 teaspoon) and spread it around the bottom of the pan with a spatula (you could use butter as well). Place one flour tortilla on the skillet. Flip the tortilla over a few times, 10 seconds between flips. Air pockets should begin to form within the tortilla. Remove the tortilla and repeat with the second tortilla. Leave the second tortilla in the pan and reduce the heat to medium.

You can also use just one tortilla instead of two, and fold the tortilla over itself like an omelette.

Cut like a pie into six pieces. A pizza wheel works well for this. Place on a serving plate. Serve with avocado slices and sour cream. Garnish with chopped fresh cilantro. 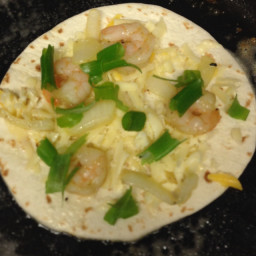 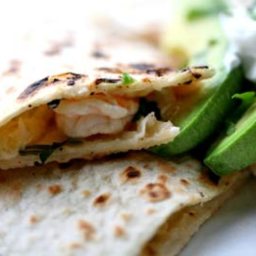 Saraboysen
I used precooked shrimp and I think these would have been more flavorful had I used raw. The shrimp did not take on the flavors of the marinade. Will try again.
3y
Reply
Reply

jbooshey
Nice flavor combos. I think the quesadilla could have a little more filling though.
4y
Reply
Reply

vbchjewel
Also added pre-made pico to the quesadilla. Husband was over the moon! Loved it.
4y
Reply
Reply

BetR25
Wonderful recipe! I have 3 children and it is hard to please them all. They all loved the shrimp quesadilla!
6y
Reply
Reply

Vipercook
Holy crap that was good! No need to go to a restaurant anymore for those. Topped with some quac, pico, and salsa. Fantastic. Went a touch more of everything (full juice of lime, 2 teaspoons chile powder, almost 2 tbsp of onion and 2 tbsp of cilantro). Top notch.
6y
Reply
Reply