In a metal 9"x13" baking dish, mix chopped nuts with melted butter and flour. Press down with fingers until solid on the bottom of the dish. Bake for 10-15 minutes. Take the crust out of the oven when golden brown.

While that's cooking, mix cream cheese with first tub of whipped topping. In a separate bowl, mix instant chocolate pudding; use the pie recipe on the box for milk measurement. Cool crust before layering, though not too cold as the cream cheese/whipped topping layer will break up the crust when you try to spread it.

Spread on the cream cheese mix then the pudding on top of that and top it with the second tub of whipped topping.

Be sure to use a metal dish.....the crust will stick to the bottom of a glass dish. 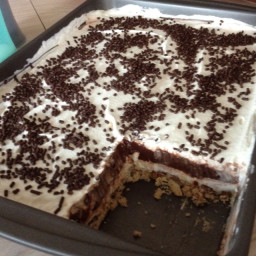 ondraya43
This recipe is soooooooo good! I am going to make it again!
6y
Reply
Reply