Simply delicious! This juicy shredded barbecue beef is very popular at our family gatherings. The tender meat is slow-cooked in a savory sauce that includes chili powder, paprika, coffee, ketchup, brown sugar, brown mustard, hot sauce and cider vinegar. It is rich, flavorful and so good it almost melts in your mouth! Make your favorite creamy or vinegar-based coleslaw to serve with or "on" this great tasting barbecue sandwich. Freeze any leftover barbecue in an airtight container for up to 3 months.

Trim and discard any exterior fat from a well-marbled chuck-eye roast. Cut trimmed roast in half and then cut each piece in half again. Place meat pieces in slow-cooker. Cook bacon in large heavy-bottomed skillet over medium-high heat until crisp. Transfer cooked bacon to slow-cooker. Pour off bacon drippings from skillet reserving about 2 tablespoons. Add onions to skillet and cook over medium heat until softened and translucent. Add chili powder and paprika and cook until fragrant, about 1 minute. Stir in coffee, ketchup, brown sugar, and 1 tablespoon of mustard; simmer until slightly reduced, about 10 to 15 minutes. Pour half of sauce over meat in slow-cooker; let remaining sauce cool, then refrigerate until needed. Set slow-cooker to low, cover, and cook until meat is fork-tender, about 9 to 10 hours, or cook on high for 5 to 6 hours.

Coarsely shred meat using 2 forks, discarding any excess fat or gristle. Toss meat with 1 1/2 cups sauce and let sit, covered, until meat absorbed most of sauce, about 10 to 15 minutes. Season with salt and pepper. Serve on rolls, passing remaining sauce at table to spoon over the sandwiches.

It's traditional in some parts of the country to serve cole slaw on a barbecue sandwich. Pile chopped or pulled meat on the bun and top the meat with a spoonful of cole slaw, which is also known as ?chow? down South. The tart, crunchy cabbage goes perfectly with the smoky flavor of the meat. 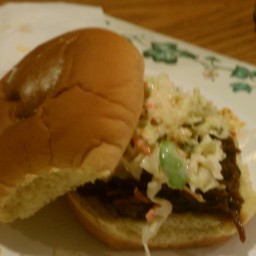 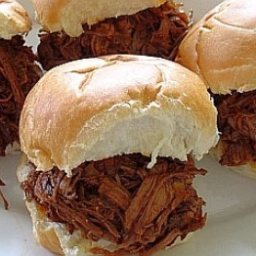 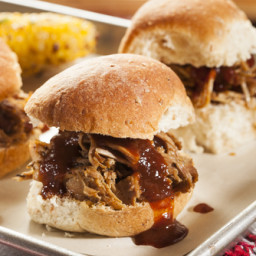 kmacca
This was so good!! although its time consuming it was well worth the wait, The aroma all throughout in my house was amazing, the dog wouldn't leave my side for fear she'd miss a taste! I had a hard time finding Brown mustard so I used dry mustard, I somehow forgot to buy Hot sauce so I used Worcestershire sauce instead .All I had was apple cider vinegar. it tastes amazing and no over powering taste due to my substitutions. Thank You so much for the recipe
7y
Reply
Reply

twinmamaof4
This was so good. I know it seems like a lot of work but it really isn't. So worth it!
7y
Reply
Reply

mezgalea
I have made this recipe many times now and absolutely love it. I follow the recipe exactly except for the liquid smoke as I live in Australia and have no idea where to buy that, but I find the coffee adds a lovely flavour anyway.
8y
Reply
Reply

Gutzj01
I have made this recipe so many times because it is so incredibly good. It makes a lot so I make it when we have guests over. It is always a hit. I make it exactly per the instructions and it is perfect. I highly recommend! Thank you for sharing this.
8y
Reply
Reply