The night before the barbecue, combine all marinade ingredients,except the Jack Daniels, in a lidded quart jar, adjust all quantities to taste, then mix in the Jack Daniels and let it sit overnight.

The next morning, put the ribs in a plastic bag and pour the marinade over them. Tie the bag closed. Turn the meat every hour while you're getting the smoker ready.

Prepare the smoker for barbecuing, bringing the temperature up to 200 to 220 F.

Remove the ribs from the plastic bag and pour the marinade into a saucepan. Transfer the ribs to the smoker, fatty side up. Add a pouch of hickory chips to the fire box to add smoke for the first hour.

Bring the marinade to a boil then reduce the heat to low and keep it well below a simmer.

Remove the ribs from the smoker and let them rest for around 10 minutes. While they're resting, add some ketchup and a little honey to the remaining marinade to taste and use it as a dip.

Adapted from recipe by Nick Cramer, posted on A.B.F.

You can't hurry with your smoking. When it's done, it's done, and not until. 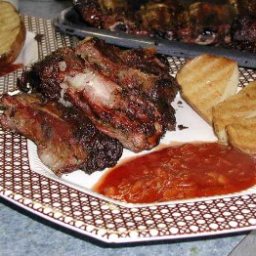 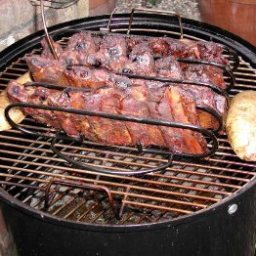 RVanderwielen
Excellent recipe...loaded with flavor. We used pork country ribs once, and it was equally good!
8y
Reply
Reply

promfh
You can't hurry with your smoking. When it's done, it's done, and not until. [I posted this recipe.]
15y
Reply
Reply